Chinese linked to Marcelino in drugs hopes ‘truth will come out’ 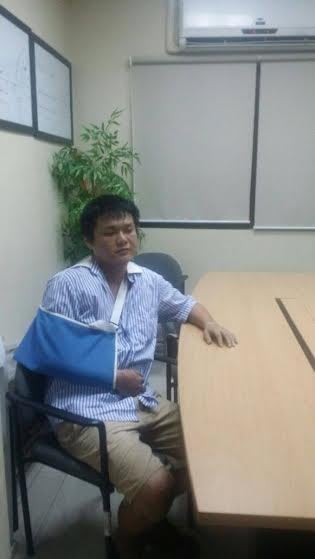 MANILA — I want the truth to come out.

This was the statement of Yan Yi Shuo, the 34-year-old Chinese who was previously arrested with Lt. Col. Ferdinand Marcelino on Jan. 21, 2016 for possessing P380 million worth of illegal drugs but who was released with Marcelino on bail in June 2016 by the Quezon City Regional Trial Court.

Last September, Justice Secretary Vitaliano Aguirre II reopened the investigation into the case.  On Dec. 29, the Manila Regional Trial Court announced the warrant of arrest for Marcelino and Yan Yi Shuo, finding probable cause to try the two for illegal drug possession and rejecting their motion to suspend their arraignment.

Yan Yi Shuo, who was interviewed by reporters at the NBI’s Special Task Force unit on Wednesday, said he was entertaining thoughts of surrendering as early as “the other day” so he could clear his name.

“I was not hiding,” the Chinese said in Filipino, his right arm supported by a cast.

Shuo said his arm had sustained the sprain in a motorcycle accident on Christmas eve in the province, where he also attended a Christmas party.

Moises Tamayo, agent in charge of the task force, said Shuo spent the night at the NBI jail after his arrival at the NBI headquarters around 9 p.m. on Tuesday.

Tamayo said they took the Chinese at the headquarters after a “rendezvous” with him at Boni Serrano in Mandaluyong between 8 and 8:30 p.m.

Tamayo said the rendezvous was made possible by Shuo’s lawyer, who contacted the agent early in the day through their “common friend.”

“Shuo said he was scared he (Shuo) might be killed because there are allegations (Shuo’s) work was clean but it was Marcelino who screwed him over,” Tamayo said, refusing to elaborate.

In the interview, Shuo said, however, that he came forward to clean both his and Marcelino’s name.

He reiterated that he and Marcelino were  in the unit in Celadon Residences where illegal drugs were found by authorities serving a search warrant because they were only “verifying” the location.

“The truth will sooner or later come out,” he said.

He also denied there were threats to his life.

He said the last time he talked to Marcelino was on Dec. 25.

During that time, he said they did not talk about surrendering because there was still no warrant against them at that time.

“How can I talk to him now? I have no cellphone, nothing,” he added in Filipino.

Shuo said he was ready to face the charges against him in court.

Tamayo said in the meantime, Shuo would stay in the NBI headquarters.

He said they were waiting for the disposition of the Manila Regional Trial Court Branch 49, which issued the warrant of arrest dated Dec. 22 against the Chinese and Marcelino.

Tamayo said the NBI already returned the warrant to the court on Wednesday morning.  SFM