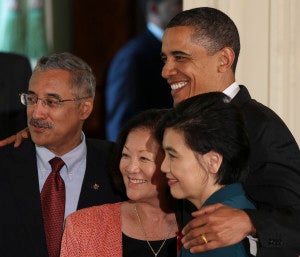 “He recognizes what it means to be bicultural or bilingual – that it’s something we can contribute to America rather than being seen as a potential enemy or alien,” noted Asian American scholar and activist Helen Zia. U.S. Rep. Mike Honda (Dem-California) praised Obama for “understanding what it means to be inclusive and to be on the other side. It just makes me smile and makes me proud that we have someone like him as the American face.”

In his first 100 days, Obama appointed a record three Asian Americans to his cabinet, signed a measure authorizing $200 million in back pay to Filipino World War II veterans, re-established the White House Initiative on Asian American Pacific Islanders (WHIAAPI), initiated policy consultations with immigrant rights groups on how to revamp a broken immigration system, and quickly focused his foreign policy attention to the Pacific.

During his eight years in the White House, Obama expanded health care access, benefiting many of the two million uninsured AAPIs. Among Asian Americans under the age of 65; the uninsured rate has declined by 55 percent since 2013. 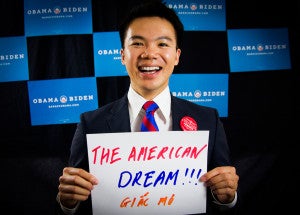 On immigration reform, he decried congressional inaction and then took executive action to protect from deportation as many as 800,000 young undocumented immigrants, including 15,000 Filipinos. By instituting the Deferred Action for Childhood Arrivals (DACA) program, the President allowed the so-called “Dreamers” to apply for temporary legal status and work permits.

The Obama administration has been touted as the most diverse in American history with, women and minorities holding a majority of the top policy positions for the first time ever.

A total of 15 Filipino Americans played key roles, including Camille Calimlim Touton as Deputy Assistant Secretary in the Department of the Interior, Jason T. Lagria as Special Assistant in the U.S. Commission on Civil Rights, Carla V. Bernal as Deputy White House Liaison in the Justice Department, Veronica Valdez as Special Assistant in the Defense Department, Joe Bañez as Legislative Analyst in the Office of National Drug Control Policy, Daniel B. Prieto as National Security Council Director for Cybersecurity Policy, and Jason Tengco as Deputy Director of WHIAAPI.

During celebrations of AAPI History Month, the White House brought together thousands of AAPI artists, advocates and business, community, and Federal leaders from across America for a White House Summit to discuss key issues facing their communities. The WHIAAPI also hosted the first-ever celebration of Filipino American Month in October 2015, followed by another in 2016.

“These celebrations during the Obama administration demonstrate the President’s commitment to our issues and causes,” says Rozita Lee, former member of the President’s Commission on AAPIs. “He also appreciates our history as immigrants and our contributions to this country.”

On the issue of Filipino World War II veterans, President Obama has been “a champion for our veterans throughout his time in public service on the national stage,” says Maj. Gen. Antonio Taguba (Ret), Chairman of the Filipino Veterans Recognition and Education Project (FilVetREP).

“We’ll never forget that among his first acts in office was the signing in January 2009 of a bill creating the Filipino Veterans Equity Compensation (FVEC) Fund, which grants a one-time lump sum payment to Filipino World War II veterans. We also remember his most recent executive action this year to launch the Filipino WWII Veterans Parole Program, allowing veterans to reunite with their families. We salute him for his leadership.”

The White House Initiative on AAPIs, housed in the Department of Education, worked closely with Filipino veterans to ensure timely processing and review of applications to support awards to as many beneficiaries as possible. As of early 2016, 42,755 applications were processed and over $225 million has been paid out.

In June 2016, U.S. Citizenship and Immigration Services (USCIS) launched the Filipino World War II Veterans Parole Program. Thanks to President Obama’s executive order, the program will allow certain family members of Filipino World War II veterans who are beneficiaries of approved family-based immigrant visa petitions an opportunity to seek a discretionary grant of parole on a case-by-case basis. By fast-tracking their visa applications, family members may come to the United States sooner than later and reunite Filipino WWII veterans with their loved ones. 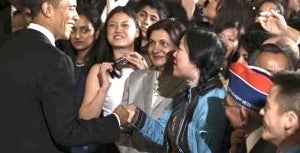 Bookending President Obama’s actions in the closing days of his Presidency was the signing on December 14, 2016 of the “Filipino Veterans of World War II Congressional Gold Medal Act of 2015.” The legislation, passed by Congress on November 30, awards a Congressional Gold Medal — Congress’s highest expression of national appreciation for distinguished achievements and contributions — to the Filipino veterans of World War II in recognition of their dedicated service.

“The signing of the bill contributes to the historical strides that President Obama has made to honor and recognize Filipino American veterans as an integral part of American history,” Taguba said. “Recognition, after all, is what our veterans need more than anything else, an official thank you from the government that ordered them to fight under the American flag.”

On the issue of race, the AAPI community hailed President Obama as “the bigotry antidote.” He used the bully pulpit to lift up voices from communities of color. After 9/11, the AAPI population – notably Muslims, Arabs and South Asians – was subjected to hateful rhetoric, racial stereotyping and divisionary policies. President Obama condemned this trend by implementing several anti-bullying and anti-hate initiatives.

Thank you, President Obama, for your leadership and for your legacy of inclusion and compassion.