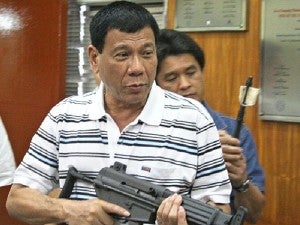 NEW YORK CITY—”I killed about three of them because there were three of them. I don’t really know how many bullets from my gun went inside their bodies. It happened. I cannot lie about it.”

Earlier he had told business leaders that when he was mayor of Davao City, he would go “with a motorcycle, with a big bike around, and I would just patrol the streets, looking for trouble also. I was really looking for a confrontation, so I could kill.”

There you have it.

In well-publicized public events and press conferences, Philippine President Rodrigo Duterte, the prime defender of the Constitution, of citizens’ civil rights, is a self-confessed killer. How will his die-hard followers justify such brazen and criminal behavior on the part of the former mayor, substantiating what his critics have long claimed? And how many times since did he prowl Davao’s streets looking for similar confrontations?

Why is he admitting to these crimes and why now?

Isn’t he daring the Congress to do something? The courts? To unpresident him, to use a felicitous malapropism, when he meant “unprecedented,” from the Donald (a possible outcome that one wishes to be devoutly consummated in his case)? From all evidence, the Congress, apart from a few solitary voices, won’t do anything to challenge Duterte’s ham-fisted rule. Nor will the courts, unless a suit is brought against him—to allow him, as is his right, to the judicial process to determine his guilt or innocence, the same process that has been denied the many victims (and counting) of the immoral, illegal war on drugs.

The president must think he is indeed Dirty Harry, daring the bad guy “to make my day.” And I suppose that he’s signaling his solidarity with the police (and the vigilantes), donning the mantle of a doer and not just a preacher.

Evidently, most of his statements and actions are meant to goad the opposition and the public to challenge him. He wants to see how far he can go. So far his governance has been one of impunity. (Not to mention one of neglect of such pressing issues of the now-stagnating economy and the perennial hellhole that is Metropolitan Manila’s traffic.)

On the part of the institutions that claim to have the interests and well being of the public at heart, the silence has been deafening. That of the Catholic Church is especially disturbing.

Where is Cardinal Luis Antonio Tagle’s voice in all this madness? As Bishop of Manila, he has an obligation to the faithful, particularly those who have no recourse to the corridors of power, and that would constitute the vast majority of his constituency.

If ever there was a time when this shepherd needed to step in and speak up on behalf of his flock, this is it. This is no time for finessing the power game, of attempting to sound reasonable while the poorest of the poor are routinely slaughtered, accused of being drug addicts and/or pushers, with no judicial recourse.

By keeping silent in the face of these extrajudicial killings, these salvagings, to use a Marcos-era term that has sadly regained prominence, aren’t the Cardinal and the institutional Philippine Catholic Church complicit? If Cardinal Tagle is somehow thinking that his accommodation with the Duterte regime will help him in attaining the papacy, he is mistaken. He should look to the example of John Paul II who was a fierce critic of his native Poland’s Communist government. Whatever faults that pope had, he was a man of conscience. 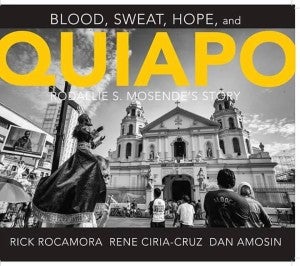 Even as darkness falls on the land and across the globe, there are still many moments of incandescence that augur well for the survival of humanity’s best instincts. In Blood, Sweat, Hope, and Quiapo: Rodallie S. Mosende’s Story, by documentary photographer Rick Rocamora, with Rene Ciria-Cruz and Dan Amosin, the street dwellers of Quiapo, and one in particular, are the focus of attention. (Rocamora took the pictures, Ciria-Cruz wrote the foreword, and Amosin contributed the lead essay. Full disclosure: Ciria-Cruz is INQUIRER.net’s U.S. bureau chief and thus the editor of this columnist.)

The denizens of Quiapo are among the marginalized of Manila society, and by their very powerlessness and poverty are prime targets of Duterte’s war on drugs. The portraits offered here, both verbal and visual, are for the most part unsentimental and forthright.

Among the many are those of Aling Flora, a 70-year-old plastic bag vendor; Nanay Siony who after living in Japan for 20 years as an undocumented person and becoming fluent in Japanese, returned to Manila, and now sells sampaguita garlands; Boy Bara Bara, ex-convict and member of the notorious Sputnik gang, doing odd jobs in order to survive and stay out of jail; and the Muslims who have fled the wars in Mindanao and have settled in the warren of streets in and around Quiapo’s mosque, counterpart to the Quiapo Church, home of the revered Black Nazarene statue.

And that is the case with Rodallie S. Mosende. Bright, pretty, young, and driven by an overwhelming desire to move up the social ladder through education and to a more fulfilling life, Rodallie graduated this past April. Rocamora’s documentation of her life on the mean streets generated a lot of publicity and resulted in an anonymous angel providing her with a scholarship so she could complete a four-year college course.

She herself now tutors the kids on the streets, her way of paying back. Nor have the circumstances of her life prevented her from serving on the local barangay council. Unaffected by bitterness or cynicism, Mosende is an inspiration to us all.

(The book is available at the Ayala Museum Book Shop and other bookstores in Metro Manila; or to order, email Rick Rocamora [email protected]) -Copyright L.H. Francia 201

Read Next
Duterte slams US, Catholic Church for not helping in war vs drugs
EDITORS' PICK
Mass testing on April 14; but who to test is unclear
Cash aid trickles down to cities meeting DSWD requirements
US urges masks as dramatic steps to combat virus roll out
Rights groups wary as NBI summons 17 for ‘fake news’
Quick chat with Nicole Andersson: ‘You really don’t need much to be happy’
Quest for COVID-19 cure: PGH needs blood samples from recovered patients
MOST READ
Angelica Panganiban on endorsing Duterte in 2016: ‘Patawarin niyo ko’
PACC to NBI: Probe Robredo for ‘competing with national govt’ in fight vs COVID-19
PACC’s COVID-19 motto? ‘Lahat ng tutulong, ikukulong’ — Lacson
5 Filipinos on Forbes Asia’s “30 Under 30” roster
Don't miss out on the latest news and information.