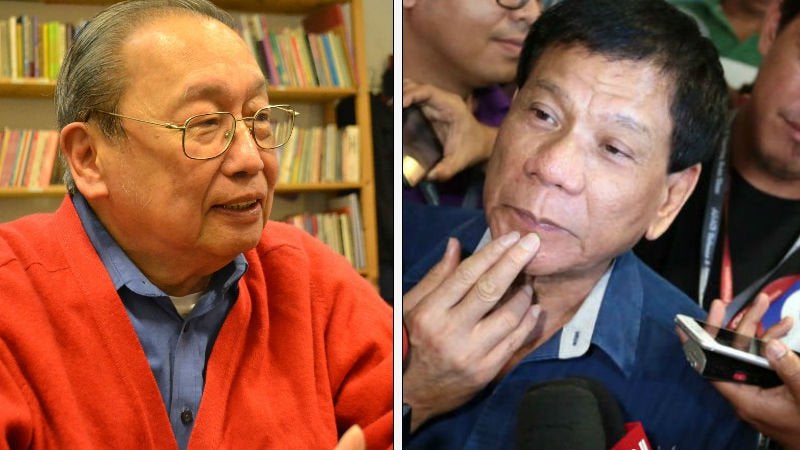 President Rodrigo Duterte has told Jose Maria Sison in a telephone conversation he wants a broad ceasefire agreement before he orders the release of more political prisoners in a major effort to move forward a peace process with the Communist Party of the Philippines (CPP).

Mr. Duterte spoke with the CPP founder based in Utrecht, The Netherlands, early Tuesday—Monday evening in the Dutch city—and talked as friends, according to presidential spokesperson Ernesto Abella.

Mr. Duterte mentioned his conversation with Sison in a speech on Tuesday afternoon, saying he had brought up the issue of the political prisoners’ release.

Mr. Duterte also said he could not share power with the communists and that Sison knew this. But the two sides could have consultations  “every now and then” about labor contractualization issues, he said.

Sison said the guns of the communist rebels and government troops could be expected to remain silent during the holidays, even if peace negotiators have yet to hammer out a joint bilateral ceasefire deal.

The government and the communist rebels have existing separate, indefinite ceasefire declarations.

As for the bilateral ceasefire deal being worked out by the two sides, he said the issue, along with amnesty and release of political prisoners, could be discussed and agreed upon “before, during, and even after” the third round of talks next month.

No details of the joint ceasefire mentioned by Mr. Duterte have been released. The guerrillas numbered more than 25,000 at their peak strength during Ferdinand Marcos’ dictatorship. Military estimates now put the guerrilla force at no more than 4,000 fighters collecting “revolutionary taxes” from businesses.

On Monday, Labor Secretary Silvestre Bello III, chair of the government peace panel, said Mr. Duterte had “more or less” approved the release of 20 political prisoners ahead of the CPP’s 48th anniversary on Dec. 26. They would include the sick and elderly, for humanitarian considerations.

Too much, too soon

Mr. Duterte earlier rejected the demand of the NDFP, the CPP’s political arm, to free 130 insurgents, saying he had given “too much, too soon” to the communists.

A bilateral ceasefire deal is expected to pave the way for the permanent cessation of hostilities between the two sides. This would mean they would subscribe to a common set of rules, including a list of hostile acts, buffer zones and a monitoring mechanism.

With a truce on the table, the subsequent rounds of peace talks may be expected to be smoother.

Speaking at the 81st anniversary celebrations of the Armed Forces of the Philippines on Wednesday, the President told the military to observe a ceasefire from Dec. 23 to 27 and from Dec. 31 to Jan. 3.

He said communist insurgents and Moro fighters could come down from the mountains during these periods. “Be with your family on Christmas Day. I guarantee you that there will be no arrest, no oppression, no nothing,” he said.

“If you meet soldiers of the Philippines, my soldiers, on the street, just shake each other’s hands or if you don’t want to, just don’t look at each other,” Mr. Duterte said. —WITH A REPORT FROM KARLOS MANLUPIG, INQUIRER MINDANAO

Read Next
PNP tells James Taylor: No alarming extrajudicial killings in PH
EDITORS' PICK
Pagasa: Warm, sunny Sunday in most parts of PH
Is it safe to talk politics again at family gatherings? ‘The Reconciliation Dinner’ shows us what that’s like
House energy committee chair Arroyo bats for cheap electricity
EDITORIAL: To a bike-friendly future
The Best Tech Gifts For The 2022 Holidays
vivo’s coming to town to grant wishes with more holiday promos
MOST READ
LOOK: Vhong Navarro transferred to BJMP detention facility in Taguig
The Elephant Man in the Senate
Posh village as ‘shabu’ haven
LOOK: Zanjoe Marudo bonds with Ria Atayde, her family
Don't miss out on the latest news and information.