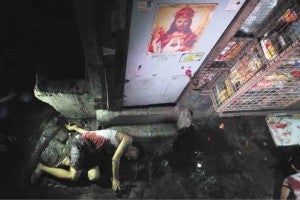 From December 6 through December 14, 2016, the New York Times published four major articles on Philippine Pres. Rodrigo Duterte’s brutal extrajudicial killings of drug suspects, now averaging about 44 killed a day. In “They are slaughtering us!” (December 7, 2016), New York Times’ news photographer Daniel Berehulak expressed shock at the scale of the killings, showing stark photos of 57 murder victims at 41 sites in the 35 days he spent in Manila.

“I witnessed bloody scenes just about everywhere imaginable — on the sidewalk, on train tracks, in front of a girls’ school, outside 7-Eleven stores and a McDonald’s restaurant, across bedroom mattresses and living-room sofas. I watched as a woman in red peeked at one of those grisly sites through fingers held over her eyes, at once trying to protect herself and permit herself one last glance at a man killed in the middle of a busy road.,” Berehulak wrote.

“I have worked in 60 countries, covered wars in Iraq and Afghanistan, and spent much of 2014 living inside West Africa’s Ebola zone, a place gripped by fear and death. What I experienced in the Philippines felt like a new level of ruthlessness: police officers’ summarily shooting anyone suspected of dealing or even using drugs, vigilantes’ taking seriously Mr. Duterte’s call to “slaughter them all,” the news photographer added.

Duterte used to do it personally

In the most recent article on the subject the New York Times’ Russell Goldman reported that Duterte personally boasted to business leaders in Manila on December 13 that “as mayor of Davao, he had patrolled the city’s streets by motorcycle looking for suspected criminals to kill.”

“In Davao, I used to do it personally — just to show to the guys that if I can do it, why can’t you?” Duterte said. Goldman wrote that “Mr. Duterte told business leaders at a meeting in Manila, explaining how he goaded police officers to gun down suspects.

“And I’d go around in Davao with a motorcycle, with a big bike around, and I would just patrol the streets, looking for trouble also,” he said, “I was really looking for a confrontation, so I could kill.” 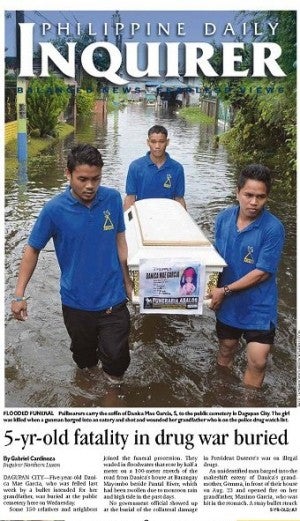 It will be recalled that just before assuming the presidency on June 30, 2016, Duterte announced at a victory rally in Davao City, which was televised nationally, that Filipinos should take it upon themselves to kill those involved with drugs. (“Kill drug dealers and I’ll give you a medal, says Philippines president”, The Guardian, June 5, 2016).

“Please feel free to call us, the police, or do it yourself if you have the gun,” he said, offering a reward to anyone who complied. Duterte has also assured police and the military that he will take responsibility for extrajudicial killings and protect anyone who assassinates suspects from being held criminally responsible.”

Among the estimated millions of readers of the New York Times, which include those who read the Times’ syndicated articles in local newspapers, are employees of the US Department of Homeland Security (DHS) who are tasked with enforcing US immigration laws.

These DHS officials may now inquire of Filipinos visiting the US as tourists or even those applying for permanent residence or for naturalization if they approve of Duterte’s extrajudicial killings as part of his war against drugs and if they were involved in or participated in “any way in the killings.”

U.S. Immigration and Nationality Act Section 212 lists the “classes of aliens ineligible to receive visas and ineligible for admission” to the United States. Included under subsection E are “participants in Nazi persecutions, genocide or the commission of any act of torture or extrajudicial killing.”

Under this subsection E is: “iii) COMMISSION OF ACTS OF TORTURE OR EXTRAJUDICIAL KILLINGS- Any alien who, outside the United States, has committed, ordered, incited, assisted, or otherwise participated in the commission of– (I) any act of torture, as defined in section 2340 of title 18, United States Code; or (II) under color of law of any foreign nation, any extrajudicial killing, as defined in section 3(a) of the Torture Victim Protection Act of 1991 (28 U.S.C. 1350 note), is inadmissible.”

This new and expanded definition of “extrajudicial killing” became law in 2004 under Title XII Anti-Atrocity Alien Deportation Act of 2004. 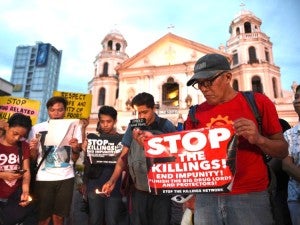 As reported in the Congressional Record of deliberations on this new law, “subsection (a) would add a new clause to Section 8 USC Sec. 1182(a)(3)(E) that would trigger operation of the inadmissibility ground if an alien has “committed, ordered, incited, assisted or otherwise participated in “acts of torture…or extrajudicial killings as defined in the Torture Victim Protection Act.”

“Extrajudicial killing,” as defined by the Torture Victim Protection Act of 1991, “means a deliberate killing without previous judgment pronounced by a regularly constituted court affording all the judicial guarantees which are recognized as indispensable by civilized peoples.”

Filipinos in the Philippines who apply online for a tourist visa will be asked on Form DS-160 will be asked if they have ever “committed, ordered, incited, assisted or otherwise participated in “acts of torture…or extrajudicial killings as defined in the Torture Victim Protection Act.” If they truthfully answered that they “assisted” Duterte by enthusiastically supporting his killings, their tourist visa application will likely be rejected.

If they somehow make it to the US, and they divorce their spouse in Las Vegas, and then marry a US citizen who petitions them for a green card, they will have to fill out Form I-485, their Application for Adjustment of Status to the United States. “Part 3 Processing Information” asks on #14 “Have you EVER ordered, incited, called for, committed, helped with, or otherwise do any of the following: a. Acts involving torture or genocide? b. Killing any person?…”

“Helped with” is quite broad and may include enthusiastically endorsing and cheering Duterte’s policy of extrajudicial killings in his war against drugs.

If these pro-Duterte Filipinos somehow acquire their green cards by lying about their support for Duterte’s EJK and they then apply for naturalization as a US citizen, they will have to fill out Form N-400. In it on Part 12 #14, they will be asked: “Were you EVER involved in any way with any of the following: A. Genocide? B. Torture? Killing or trying to kill someone?…”

“Any way” is quite broad and it can certainly be argued that endorsing/cheering Duterte’s “slaughter” of innocents (they are all innocent because they were never even charged with a crime much less convicted of a crime) is a “way” of being involved in the extrajudicial killings of Duterte.

After Adolf Hitler rose to power in Germany, German-Americans formed the German American Bund in July 1933 to organize support for Hitler from Germans living in the US. The US Department of Justice estimated that there were 8,000 members in the Bund, although they may have actually started with as many as 25,000. It was later discovered that the Nazis had a mailing list of 250,000 German Americans with relatives still in Germany, and a master file of over eight million German American names.

Duterte support groups in the US include Diehard Duterte Supporters (DDS), which is notable because their initials match that of the dreaded Davao Death Squad (DDS) which was responsible for the murders of more than 1500 drug suspects in Davao during Duterte’s 20 year term as city mayor.

The same Title XII Anti-Atrocity Alien Deportation Act of 2004 may also bar Pres. Duterte from visiting the United States. This same law prevented Afghanistan’s First Vice President Abdul Rashid Dostum from being issued a visa to visit the US in April 2016. This denial was based on what Dostum did in 2001 while fighting the Taliban alongside the US Special Forces. Dostum was accused of intentionally suffocating 2,000 Taliban prisoners in container trucks in the incident known as the Dasht-i-Leili massacre. 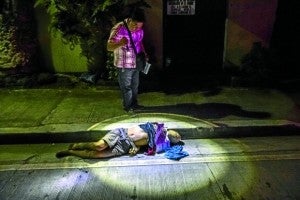 To prevent Dostum’s public humiliation, the US State Department message was quietly passed on to the Afghan government to inform Dostum that he would not be welcome in the US.

In Rappler’s December 19, 2016 issue presented the results of the latest Social Weather Stations (SWS) survey, first published on BusinessWorld, which found that 78% of its respondents were worried they could be the next victims (45% “very worried,” 33% “somewhat worried”).

While surveys show that many Filipinos still support President Rodrigo Duterte’s war on illegal drugs, the SWS survey showed that “most of them also fear that they, or someone they know, will be victims of extrajudicial killings.”

These are the latest statistics compiled by the Philippine National Police since Duterte became president:

2,124 – suspected drug personalities killed in police operations, as of December 18

4,049 – victims of extrajudicial or vigilante-style killings, as of December 15

Perhaps the time has come for Duterte’s EJK supporters in the US to also be “very worried” or even “somewhat worried” that their enthusiastic backing of Duterte may have unintended dire immigration consequences for them in the United States.

Feast Of The Holy Innocents

On December 28, Catholics all over the world will celebrate the Feast of the Holy Innocents. Read Matthew 2:16-18: “When Herod realized that he had been outwitted by the Magi, he was furious, and he gave orders to kill all the boys in Bethlehem and its vicinity who were two years old or under, in accordance with the time he had learned from the Magi. Then what was said through the prophet Jeremiah was fulfilled: “A voice is heard in Ramah, weeping and great mourning, Rachel weeping for her children and refusing to be comforted, because they are no more.”

The families of the EJK victims are weeping and in great mourning this Christmas. Pray for them.