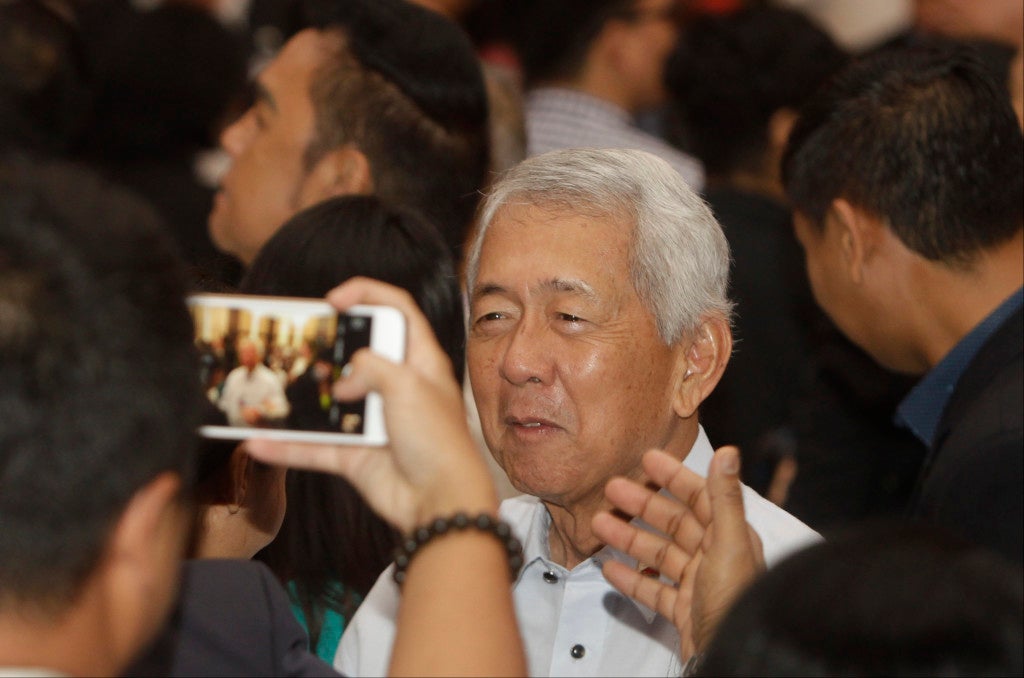 SINGAPORE—The Philippines remains practically helpless in stopping Chinese militarization activities on disputed islands in the South China Sea, but is committed to a peaceful approach to the dispute, Foreign Secretary Perfecto Yasay said on Friday.

Speaking to the press at Orchard Hotel here, Yasay said that a UN-backed arbitral tribunal had already ruled against China’s expansionist moves in July this year, even as enforcing the decision remains a problem. China had earlier rejected the ruling and called it a “farce.”

“We cannot stop China at this point in time and say do not put that up. We will continue to pursue peaceful means at which all of these can be prevented,” Yasay stressed.

He said the Philippines “will move forward in the future insofar as pursuing the enforcement of the decision of the arbitral tribunal on the basis of their findings and conclusions.”

He pointed out, however, that it was wiser to let other countries with “special concerns” on China’s activities take action, citing the United States and Japan which had raised concern on freedom of navigation and overflight operations.

“Let them take whatever action is necessary in the pursuit of their national interest is concerned and we will leave it at that,” Yasay said.

He said the Philippines has its own bilateral engagement with China to ensure no further actions would raise tension in the disputed region, particularly in the Panatag (Scarborough) Shoal.

“We feel that this is necessary also as part of a confidence-building measure so that we can later on go back to the issue of our dispute in the South China Sea, through peaceful resolution,” Yasay said. “In the meantime, we have placed it (the issues) at the back burner without compromising our rights as declared by the arbitral tribunal.”

His statement contrasted that of Defense Secretary Delfin Lorenzana, who on Thursday said that if true, it raises “a big concern for us and the international community who uses the South China Sea lanes for trade.”

“It would mean that the Chinese are militarizing the area, which is not good,” Lorenzana had said.

Charles Jose, spokesperson of the Department of Foreign Affairs, said on Friday that Manila was verifying the report. If proven, it would be a “cause for serious concern, because it tends to raise tension and undermine peace and stability in the region.

“We, thus, renew our call on all parties concerned to refrain from taking any action that would raise tension in the region and further complicate the situation. Concerned parties should instead work together to promote peace, security and stability in the South China Sea,” Jose told the Inquirer.

Yasay was reacting to reports that China appears to have installed antiaircraft and antimissile weapons on all of its seven  man-made islands in the region, according the US security think tank  Center for Strategic and International Studies (CSIS).

While White House spokesperson Josh Earnest said on Thursday that he could not confirm the report, Republican Sen. John McCain, chair of the Senate Armed Services Committee, said the imagery shows China is militarizing the South China Sea.

He called for a “determined response” from the United States and its allies.

“The United States must take immediate steps to underscore our unwavering commitment to freedom of the seas and to enforce a stable balance of power in the region,” McCain said in a statement.

The outposts were built in recent years over objections by the United States and rival claimants by piling sand on top of coral reefs, followed by the construction of military-grade 3,000-meter (10,000-foot) airstrips, barracks, lighthouses, radar stations and other infrastructure.

CSIS based its conclusions on satellite images taken in mid-to-late November and published on the website of its Asia Maritime Transparency Initiative.

But China’s defense ministry insisted that development on the islands was mainly for civilian purposes, but added that defensive measures were “appropriate and legal.”

“For example, were someone to be threatening you with armed force outside your front door, would you not  ready even a slingshot?” the ministry said in a statement.

CSIS said the new weapons showed that Beijing was serious in building up its defense in the sea region.

“Among other things, they would be the last line of defense against cruise missiles launched by the United States or others against these soon-to-be operational air bases,” the report said.

Beijing said the islands are intended to boost maritime safety in the region while downplaying their military utility. They also marked China’s claim to ownership of practically the entire South China Sea.

Taiwan, Vietnam, Philippines, Malaysia and Brunei also claim territory in the waterway through which an estimated $5 trillion in global trade passes each year, while the US Navy insists on its right to operate throughout the area, including in waters close to China’s new outposts.

China has strongly criticized such missions, known as freedom of navigation operations. —WITH REPORTS FROM TARRA QUISMUNDO, DJ YAP AND AP