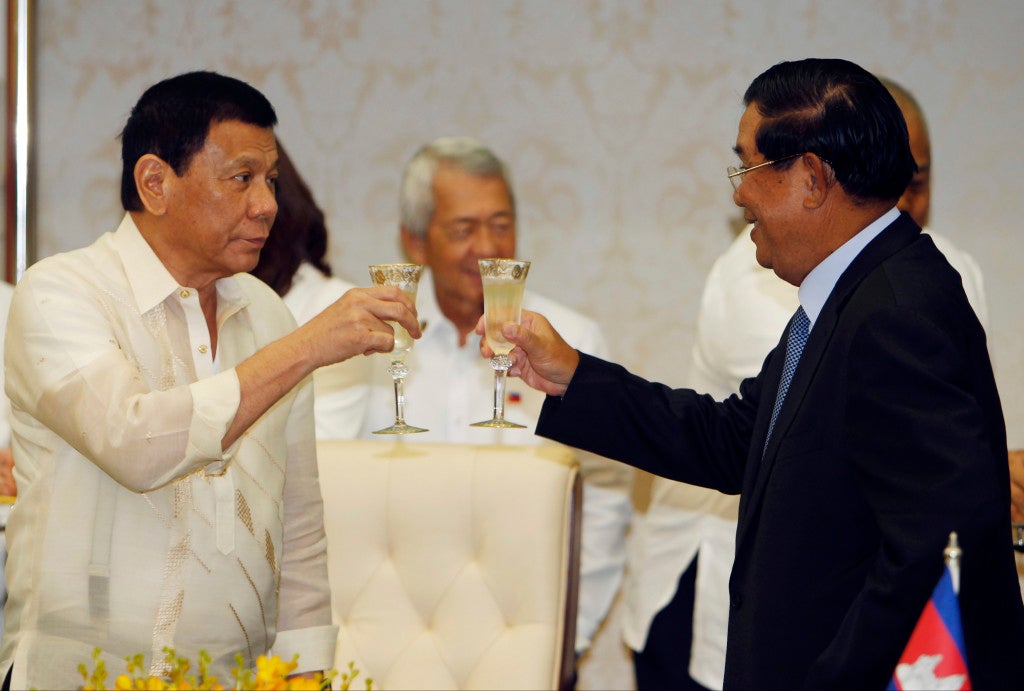 Cambodia’s Prime Minister Hun Sen, right, toasts with Philippine President Rodrigo Duterte during a signing ceremony at the Peace Palace, in Phnom Penh, Cambodia, Wednesday, Dec. 14, 2016. Duterte is on a state visit to Cambodia, where a meeting with Prime Minister Hun Sen will bring together two Southeast Asian leaders known for their tough-guy approach to governing. (AP Photo/Heng Sinith)

PHNOM PENH—President Duterte on Wednesday put on his best behavior in front of the Cambodian monarch—very regal, very elegant and very gentle—far from the expletive-spouting toughie he is back home.

In return, King Norodom Sihamoni made an exception and took time out from a retreat to meet the Philippine version of filmdom’s “Dirty Harry” turned president.

Foreign Secretary Perfecto Yasay Jr. said the Philippines was grateful that the king came out to receive Mr. Duterte despite the day being a Buddhist holiday in Cambodia.

“The holiday is intended to honor the saints of their faith and the king is one of the saints of Cambodia, on account of which he normally is supposed to be in retreat. But he took this as an exception to meet with our President, whom he considers a very important person,” Yasay told reporters.

He said the Philippines had asked for a working trip for Mr. Duterte, but Cambodia decided to make it a state visit.

Students waving Philippine flags and Mr. Duterte’s pictures lined the streets and the king received Mr. Duterte upon his arrival at the Royal Palace in the morning.

The President was given arrival honors, and the two leaders trooped the line together. Philippine and Cambodian flags festooned the Palace gardens. The Cambodian band played the Philippine national anthem.

Mr. Duterte and the king then proceeded to the throne hall.

“We had earlier a bilateral meeting with his royal majesty and you see the king of Cambodia is a very cultured person, very intelligent, very regal, very elegant, well respected by the people and I was personally amazed by the fact that our President had measured up to this very important occasion,” Yasay said.

Mr. Duterte was “very regal, very elegant and very gentle insofar as his engagements with his royal majesty this morning,” according to Yasay.

The President later visited Independence Memorial and the monument of the father of Cambodia, King Norodom Sihanouk, to lay wreaths and pay his respects.

In October during a visit to Tokyo, Japanese officials worried about Mr. Duterte’s demeanor in front of Emperor Akihito after he was seen chewing gum at meetings and public occasions and walking with his hands in the pockets of his pants—a no-no in the Chrysanthemum Throne.

Mercifully, the meeting between the emperor and the President was called off following the death of Akihito’s uncle, Prince Mikasa.

Mr. Duterte likewise missed the chance to prove his detractors wrong and show what Yasay on Wednesday described as a regal and elegant demeanor before a royalty.