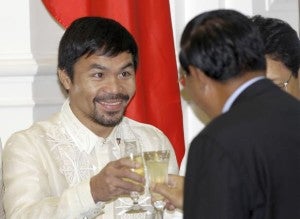 Phnom Penh — Aside from expressing an interest to work with the Philippines in combatting crime and illegal drugs, Prime Minister Hun Sen also had a special request for Sen. Manny Pacquiao during the expanded bilateral meeting between Philippine and Cambodian leaders on Wednesday.

Pacquiao, a member of President Rodrigo Duterte’s official delegation on his two-day state visit to Cambodia, was present in the meeting of the two national leaders.

Hun Sen is a big fan of Pacquiao, who is immensely popular in Cambodia, Ambassador Christopher Montero said earlier.

During the meeting, Duterte and Hun Sen also discussed ways they could work together to address the illegal drug and crime problems.

The crackdown on the illegal drug trade is the centerpiece program of the Duterte administration, and earlier reports said Hun Sen had called on authorities to step up efforts to address the narcotics trade after his meeting with the Philippine President on the sidelines of the Asean summit in Laos.

Defense cooperation was also discussed during the closed-door meeting, though Malacañang provided no details on this matter.

Duterte and Hun Sen also talked about technology transfer from the Philippines’ International Rice Research Institute to improve rice seeds, as well as the construction of a 100-percent Filipino-owned rice warehouses in Cambodia.

They also discussed plans to offer Philippine scholarships for Cambodians, particularly in the science and engineering courses.

The leaders also discussed plans to hold a trade fair between the Philippines and Cambodia, as well as the establishment of direct flights between Manila and Phnom Penh.

Earlier this year, Cambodia began implementing its new traffic law that is meant to address the death toll in the country’s roads.

The new law has authorities being stricter in inspections and in the implementation of the rules on wearing helmets, speeding, driving under the influence of alcohol, staying on the correct lane, and overloading of vehicles, reports said. –ATM