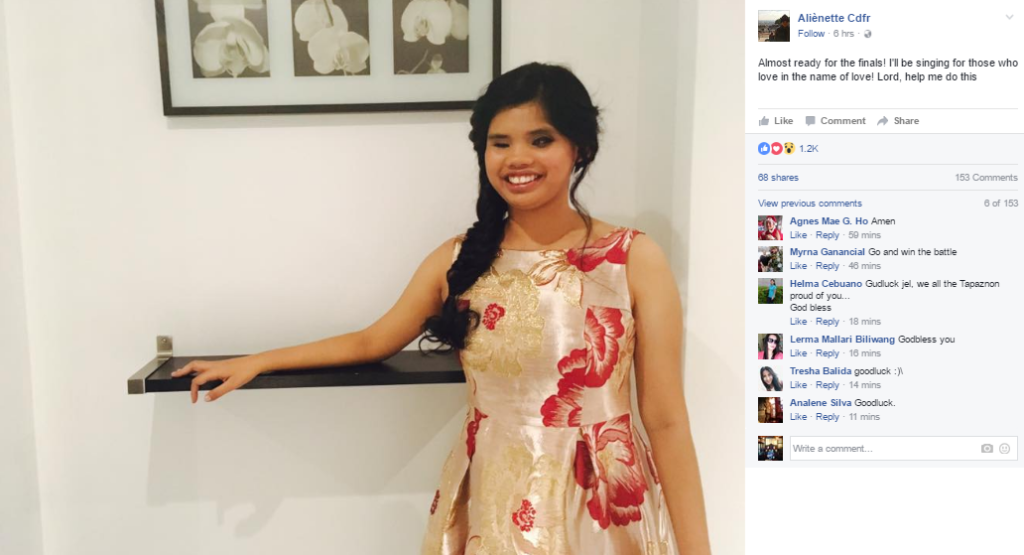 Katchry Jewel Golbin, aka Alienette Coldfire, poses for one more picture before the finals of ‘France Got Talent,’ where she later placed 3rd. SCREENGRAB FROM ALIENETTE CDFR FACEBOOK PAGE

The blind Filipino singer who became an online sensation for her moving story and audition piece finished third in the grand finals of the French talent show France a un Incroyable Talent (France Got Talent) on Tuesday evening (Wednesday morning in Manila).

Katchry Jewel Golbin, known for her stage name Alienette Coldfire, earned a standing ovation from the show’s judges for her final performance—a rendition of Jacques Brel’s “Quand on n’a que l’amour” (When Love Is All You Have).

The 26-year-old English graduate’s rendition of Les Miserables’ “I Dreamed A Dream” during the elimination round went viral and moved one of the judges to tears.

She enrolled in French as a course selective in college but practiced speaking the language with Facebook friends through special software.

Golbin first became an online hit two years ago when she was filmed belting Mariah Carey’s “I’ll Be There” in mall in Iloilo City. YG / CBB