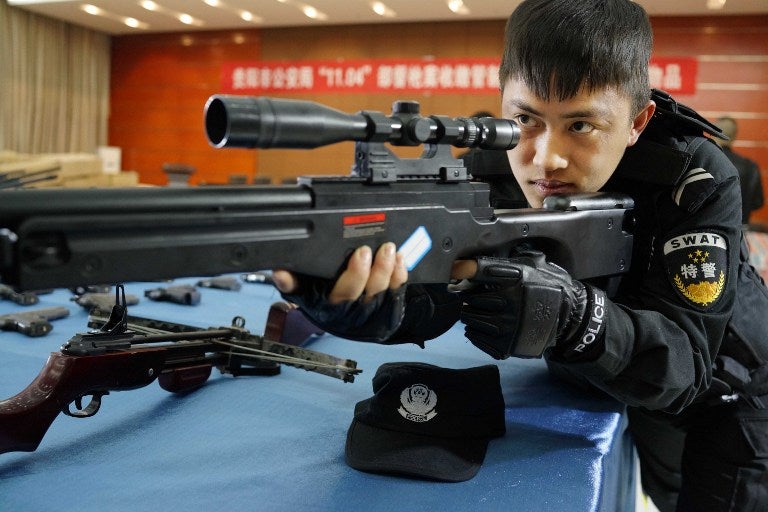 A SWAT policeman in Guiyang, southwest China’s Guizhou province tries out a sniper rifle. President Rodrigo Duterte said he had decided to accept an arms deal offered by China. AFP

President Rodrigo Duterte said Sunday that he has decided to accept an arms deal being offered by China under concessional terms, in the latest sign of cozying relations between the once-hostile neighbors.

Duterte said in a speech before troops that he’ll ask his defense secretary to send military officials to China to receive the firearms, which will be payable over 25 years. He did not provide further details.

“China is pressing me on the firearms, which are already there. I’ll accept them. They’re rushing it,” Duterte said.

“We don’t need to ask from others because they’re willing to give it,” he said. “This isn’t free, but it’s actually a grant payable in 25 years.”

Defense Secretary Delfin Lorenzana said the military is also considering purchasing sniper rifles from Russia, adding that the Philippine army and marines would undertake a study to see whether a deal could be forged. Lorenzana visited Russia last week on Duterte’s order to meet defense officials, the first-ever visit by a Philippine defense chief to Moscow since diplomatic ties were established in 1976, officials said.

“If their sniper rifles are superior as they claim, we may decide to acquire,” Lorenzana told The Associated Press. “The army and marines will conduct tests and determine how many they may require.”

Duterte reached out to China and Russia after taking office in June while taking a hostile stance with the Obama administration after the latter criticized his deadly war on drugs.

The Philippines has heavily depended on the U.S., its treaty ally, for weapons, ships and aircraft for years, although it has turned to other countries for defense equipment as it struggled to modernize its underfunded military in recent years.