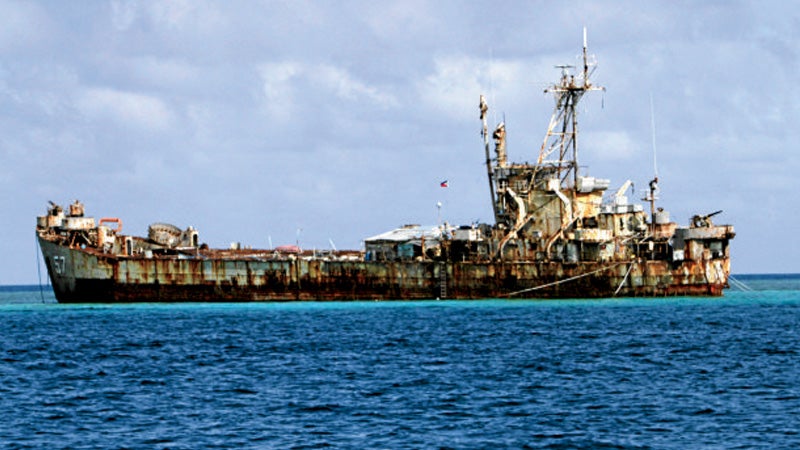 GUARDING AYUNGIN Filipino troops aboard the decommissioned BRP Sierra Madre guard Ayungin, one of the shoals being claimed by China in the South China Sea.

It is highly unlikely that the Philippines will allow the US military to use it as a springboard for freedom of navigation patrols in the disputed South China Sea to avoid antagonizing China,  Defense Secretary Delfin Lorenzana said.

Lorenzana said on Thursday that US ships and aircraft could use bases in Guam, Okinawa or fly from aircraft carriers to patrol the disputed waters.

Under Mr. Duterte’s predecessor, Benigno Aquino III, some US aircraft and ships stopped in the Philippines on the way to patrolling the disputed waters to challenge China’s territorial claims.

President Rodrigo Duterte, who took office in June, has taken steps to mend ties with China and became hostile toward the Obama administration after it raised concerns over Mr. Duterte’s deadly crackdown on illegal drugs.

Asked if the Philippines will continue to host US ships and aircraft patrolling the disputed waters, Lorenzana said Mr. Duterte would not likely allow that to happen “to avoid any provocative actions that can escalate tensions in the South China Sea. It’s unlikely.”

“We’ll avoid that for the meantime,” Lorenzana said. “Anyway, the US can fly over there coming from other bases.”

In Washington, state department spokesperson Elizabeth Trudeau said on Thursday she could not comment on Lorenzana’s remarks as she hadn’t seen them, but added: “Our adherence to freedom of navigation is well known. You know, we will fly, we will sail anywhere within international waters and we will continue that.”

The commander of US forces in the Pacific, Adm. Harry Harris, said last month that despite Mr. Duterte’s rhetoric, military cooperation with Manila has not changed.

Mr. Duterte has publicly threatened to scale back the Philippines’ military engagements with the United States, including scuttling a plan to carry out joint patrols with the US Navy in the disputed waters, which he said China opposes.

US-Philippine annual combat exercises have been reduced and will be redesigned to focus on disaster response and humanitarian missions. Among the maneuvers to be dropped starting next year are amphibious landing exercises and beach raids aimed at enhancing the country’s territorial defense, military officials said.

Mr. Duterte’s actions have become a hindrance to US efforts to reassert its presence in Asia, although the US military has vowed to continue patrolling one of the world’s busiest commercial waterways.