UN to ask Kris Aquino to be goodwill envoy in Asia 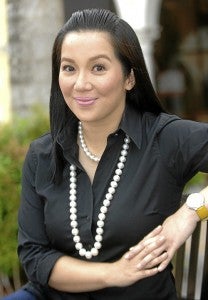 Here is one job where she can’t afford to let show biz intrigues bog her down.

If she accepts the offer, Kris will be joining the likes of film actress Angelina Jolie and the late Princess Diana, presidential political adviser Ronald Llamas said Monday. Jolie continues to go around the globe as goodwill ambassador for the UNCHR.

“(This is) in the tradition of Angelina Jolie and Princess Diana,” Llamas told a Palace press briefing.

It would be an entirely new world for the President’s 40-year-old sister and veteran actress, whose life as a show biz star had been marred by stormy relationships with actor Phillip Salvador, former Parañaque City Mayor Joey Marquez and basketball star James Yap.

Llamas, just back from a trip to Geneva, Switzerland, said the invitation for Kris to be an ambassador came from UNCHR chief Antonio Guterres.

The Philippines is the only Asian country that sits as a member of the UNCHR executive committee, Llamas said.

He said Guterres thanked the Philippines for helping address the concerns of refugees and internally displaced persons.

“The high commissioner said that 11 years before the world defined what a refugee is, the Philippines already had its definition in 1939,” Llamas said.

He said the Philippine government, for its part, thanked the UNCHR for helping repatriate almost 1,000 Filipinos fleeing the riots in Libya this year.

He said the UN agency had told him it was ready to help the country should similar incidents occur again.

Llamas said the UNCHR also thanked the Philippines for having a bill in Congress seeking to protect involuntarily displaced persons.

“That’s why they have an invitation for our President to give the keynote speech in front of more than 80 heads of states during its anniversary in December,” Llamas said.

In a statement, Llamas said he told Guterres that Mr. Aquino’s “deep concern for refugees and displaced persons” arose from his being a political refugee, too, along with his parents, the assassinated former Senator Benigno Aquino Jr. and the late former President Corazon Aquino.

The Aquino family spent three years in exile in the United States during the Ferdinand Marcos dictatorship.

Llamas said Guterres praised the “Philippines’ leadership in refugee and migration policy” and said it served as an example and inspiration to the rest of the world.

The UNCHR chief also congratulated the country for its recent accession to the UN convention relating to the status of stateless persons, according to Llamas.