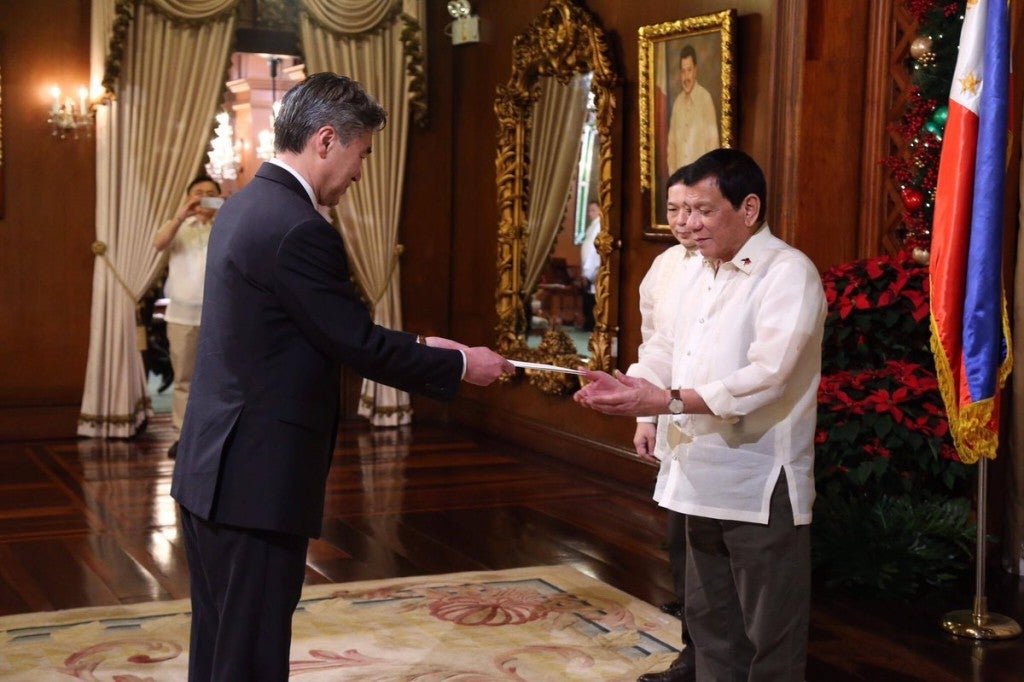 United States Ambassador to the Philippines Sung Kim meets with President Rodrigo Duterte in Malacañang to present his credentials. Kim describes their meeting as “fruitful.” Photo from Twitter account of Ambassador Sung Kim

United States Ambassador to the Philippines Sung Kim vows to strengthen the “friendship and alliance” between the US and the Philippines following his meeting with President Rodrigo Duterte in Malacanang.

Kim presented his credentials to the President in Malacanang on Tuesday afternoon.

“I am very pleased to have presented my credentials to President Duterte just now and with that, as Mr. Secretary mentioned, have a lengthy, substantive discussion. And I am grateful for the time that President Duterte afforded me today,” he said in a Palace briefing.

“It is an incredible honor for me to be in the Philippines to have this opportunity to contribute to one of America’s most enduring partnerships,” he added.

Kim arrived in Manila Thursday night to start his tour of duty. The Korean-born ambassador is replacing Ambassador Philip Goldberg, who hadd been the subject of Duterte’s personal attacks.

READ: Duterte on calling Goldberg gay: Why should I apologize?

But despite this, Kim looks forward “to working closely with the Philippines’ government and Filipino people to expand our relationship and to engage in many areas of mutual interest.”

“At the heart of that partnership is the deep bond between the peoples of our two countries. There is indeed tremendous “kalooban”, the extraordinary spirit, warmth and strength in our relationship. In addition to our close friendship and, of course, our strong alliance, we have strong economic ties that are long-standing and extensive and enthusiastic about the potential to grow our two-way economic partnership,” he said.

He said the relation between the US and the Philippines should always be based on mutual respect.

“This important relationship is, of course, based on mutual respect. I am confident that our mutual respect combined with the close ties and shared history and values will ensure stability in our relationship over the long term and the years and decades to come,” he said.

Besides his diplomatic work, Kim said he was also eager to explore the Philippines’s rich heritage.

“I am eager to get to know the Filipino people, to travel from the rolling hills of Batanes, to the beaches of Tawi-Tawi and to experience Philippines’ rich culture,” he said.

“I would like to thank President Duterte and the people of the Philippines for the warm welcome,” he added.