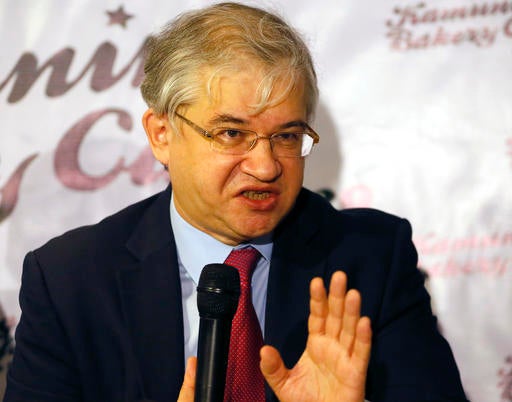 Russian Ambassador to the Philippines Igor Khovaev gestures as he talks about the Philippines and Russia relations in a media forum Tuesday, Nov.29, 2016 . AP Photo/Bullit Marquez

MANILA, Philippines  — Russia’s ambassador to the Philippines said Tuesday that Moscow is not discussing a military alliance with Manila, but rather a partnership and friendship that would see Russia supply arms and transfer technology to the long-standing U.S. ally.

Ambassador Igor Khovaev told a media forum that the two countries’ economic and trade commission will start work soon to identify specific areas of cooperation. The commission’s Russian co-chair will be visiting Manila soon, he added, without giving a date.

Khovaev said Russia is open to all options for bilateral cooperation, including the long-term supply of military hardware “without political conditionality” like adherence to human rights. He was apparently alluding to the U.S. Congress’ conditions for release of military assistance.

Since becoming the Philippines’ president in June, Rodrigo Duterte has had an uneasy relationship with the U.S. He has declared his intentions to bolster relations with China and Russia — whose leaders he has met recently — as he revamps Philippine foreign policy, which has long leaned on Washington.

Khovaev said Duterte is also expected to pay an official visit to Russia next year.

Russia is “interested in long-term cooperation” that is comprehensive and includes “all forms — supply of arms and weapons, staff training, maintenance, transfer of technology,” he added.

Aside from supplying arms and weapons, Russia is also open to cooperation in all areas, including building infrastructure like railroads, supplying electric equipment, oil and gas ventures, increasing tourism, trade and people-to-people contacts, he said.

“Everything is possible,” he said. “What we need is a wish list from our Filipino partners.”

Philippine Defense Secretary Delfin Lorenza is due to fly to Russia next week. He said he will discuss defense cooperation with his Russian counterpart, Sergey Kuzhugetovich, and will shop for Russian military equipment, specifically sniper rifles for ground troops.