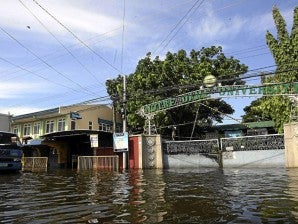 COTABATO CITY— China will invest aid money and technical assistance in a flood control and river management project to help end perennial flooding in some parts of this city and in two towns of Maguindanao along the downstream Mindanao River.

Wo Dongmei, deputy general manager of the Fifth Engineering Department of the CNEEC, said she has been looking forward to working in a long-term basis on flood control programs in the MRB.

“We want to help,” Wo told officials of the Department of Public Works and Highways of the Autonomous Region in Muslim Mindanao (DPWH-ARMM) in a meeting here on Wednesday.

CNEEC, one of the biggest firms in China, is a state-owned international engineering company based in Beijing. The coming of its team of experts followed last month’s state visit to China of President Duterte.

Mayor Cynthia Guiani-Sayadi said she welcomed the development, adding that technical intervention from China could bring in traditional and modern river management and flood control system.

Governor Mujiv Hataman of the Autonomous Region in Muslim Mindanao, said he was delighted by Wang and Wo’s expressions of commitment, saying funding would not be much of a concern in the joint undertakings, as the government of China would put up both technical and financial resources in support of the project.

Wo added that their government has given the green light to the project.

DPWH-ARMM Secretary Don Mustapha Loong expressed confidence that the partnership with the CNEEC could boost development efforts in the region.

River overflowing has adversely affected the livelihood of thousands of families in this city, and in nearby Maguindanao towns of Sultan Kudarat and Sultan Mastura.

The team of experts from China went on a site inspection with public works officials of the ARMM and national government, as well as representatives of the WEC.

The collaborating experts and engineers assessed the problem along with existing flood control management projects, as well as proposed augmentation programs designed to effectively address the problem.

Initially, they have established that about 20 percent of the area covered by the MRB is within the Muslim Mindanao region, with Rio Grande de Mindanao, Tamontaka, Ambal-Simuay and Pulangi Rivers all cutting through many of its populated and flood-prone communities.

WEC’s studies on MRB have recommended dredging and embankment along the 8.1 kilometer downstreamportion of the Rio Grande de Mindanao from the city to Illana Bay.

Dredging would increase the mainstream river’s width, but embankment would have to be constructed along the 5.1-kilometer Simuay Cut-Off Channel, Loong said.

“This [proposed project] is part of the thrust of the Duterte administration to fast-track infrastructure development programs in Mindanao.”

Flood control programs, drainage and river management projects, which the CEENC has handled, included the once flood-prone southern provinces of Li Shui and Tai Zhou and communities in Dong Tiao and Xiang Rivers in China.

The Chinese team were accompanied by Loong and Maguindanao First District Engineering Office Chief, Hadji Nasrudin Ibrahim, to site inspection in some sections of the Mindanao River or Rio Grande de Mindanao, and Pulangi and Simuay Rivers in Cotabato City and Sultan Mastura.

“We are happy with the way things are moving forward. With the inspection of the Simuay River and the Rio Grande de Mindanao by our office and the team of the CNEEC, we hope that the project can start soon, so we can then prevent the perennial flooding in Sultan Kudarat and Cotabato City the soonest time possible,” said Loong.  SFM