Russia to buy $2.5B in PH agri produce — DTI chief 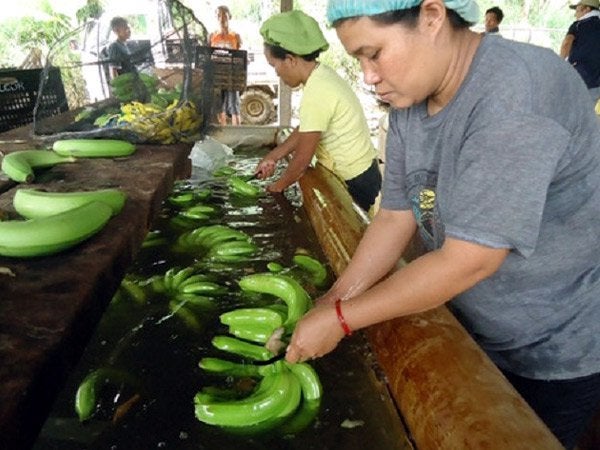 More Philippine babanas will be shipped to Russia in the coming months after Moscow said it would by $2.5 billion in agricultural products from Manila. The trade plan came after bilateral talks between President Rodrigo Duterte and Russian President Vladimir Putin during the 2016 Asia-Pacific Economic Cooperation meeting in Peru. INQUIRER FILE

LIMA, Peru — Russia committed to buy up to a staggering $2.5 billion worth of Philippine fruit, grains or vegetables during last Saturday’s bilateral discussions between President Duterte and Vladimir Putin, officials said on Sunday.

Trade Secretary Ramon Lopez said the Russian side agreed “immediately” to a proposal for the importation of Philippine fruit and other agricultural products in the next 12 months.

READ: Duterte to Putin: PH longing to be part of Europe | Duterte slams US, praises Russia

This dwarfs the $46 million worth of exports the Philippines currently ships to Russia every year, he said.

“We were talking of what they could buy from us, especially agricultural products, but nothing was specified. But I understand we supply them with a huge quantity of bananas… and mangoes. With these kinds of discussions, these present more trading opportunities between us,” Lopez said.

Lopez said Putin also offered to help the Philippines through investments in energy and infrastructure.

The Philippines may also expect more tourists from Russia, he added.

“Of course, the other side of this is their commitment to work with us on counterterrorism, counter-drugs [operations], law enforcement, education finance,” Lopez said.

The trade secretary said Putin and Mr. Duterte had established “very good rapport” in their first bilateral meeting on Saturday on the sidelines of the Apec summit.

On the Philippines’ bilateral ties with Russia, Lopez said: “I mean there’s nowhere to go but up because it’s really a relationship that offers a lot of opportunities because hardly anything happens when it comes to trade and investment with Russia.”
The talk between Putin and Mr. Duterte took place at about 12 noon Saturday (1 a.m. Manila time).

It was the first meeting between the Russian and Filipino leaders, though Mr. Duterte had been making plenty of friendly overtures toward the latter. Last week, the Philippine president spoke about his readiness to join a “new world order” under the leadership of China and Russia.

“I took note of a report that a Chinese delegation recently closed a transaction for $100 million worth of fruit from the Philippines, primarily bananas. That involves 100,000 tons only for one transaction,” he said.

He said that was a huge deal considering the Philippines shipped about 700,000 tons of bananas to China every year. CBB