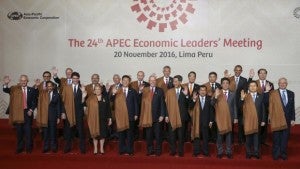 LIMA, Peru — After skipping the gala dinner of the Asia-Pacific Economic Cooperation (Apec) summit here, President Rodrigo Duterte was a no-show again at another traditional feature of the annual trade summit – the family photo of the 21 Pacific Rim leaders.

Duterte was conspicuously absent at the customary photo-op of Asia Pacific leaders as they posed for the cameras at past 1:00 p.m. in Lima on Sunday (about 2:10 a.m. Monday Philippine time).

In his place was Foreign Affairs Secretary Perfecto Yasay, who was flanked by Russian President Vladimir Putin and Papua New Guinea Prime Minister Peter O’Neill on the second row.

The leaders had traditional Peruvian shawls draped over their shoulders.

Among the others present were US President Barack Obama, Chinese President Xi Jinping, and Canada Prime Minister Justin Trudeau.

Duterte also did not appear at the gala dinner the previous evening and sent Yasay to represent him.

There was no immediate explanation from Palace officials about why Duterte missed the taking of the Apec “family picture,” one of the most anticipated activities in the annual forum.

Read Next
China assures Philippines of Panatag access
EDITORS' PICK
LTO’s P500-M deal for screws draws scrutiny
Smart reinforces superiority with best speed and mobile video experience in PH
Every Filipino home can now be a smart home with realme TechLife
Nestlé Philippines’ ‘NESCAFÉ Plan’ bags Grand Anvil at PRSP 56th Anvil Awards
New 3,045 COVID-19 cases push PH total active cases to 40,074
How to lose a PH genius: Wesley So officially a US citizen
MOST READ
US lays out list of aid to ‘satisfy’ Duterte following VFA payment demand
Robredo on Sara Duterte leading poll surveys: Why are Filipinos drawn to leadership of this kind?
How to lose a Filipino genius: Wesley So officially a US citizen
Lawyer for red-tagged tribal folk stabbed; laptop, documents taken
Don't miss out on the latest news and information.