Pinoys are like fish out of water at Panatag Shoal

PANATAG SHOAL—Filipino fishermen have continued to sail back to this traditional fishing ground despite the presence of six Chinese Coast Guard vessels.

On Monday, the fishing boat Bhuboy reached Panatag Shoal and anchored less than a kilometer from the Chinese vessels.

China and the Philippines have reached a “friendly understanding,” and Filipinos may now fish at Panatag, internationally known as Scarborough Shoal.

Still, the fishermen said they did not want to risk any confrontation with the Chinese coast guards.

“Let us not go any closer to the ships. The [Chinese Coast Guard] might drive us away,” said Mattias Pumicpic, 55, captain of the Bhuboy.

His boat ferried reporters to the shoal, including a team from the Inquirer.

From the boat, Pumicpic could see two white Chinese vessels guarding the mouth of the shoal. Also within sight were four Chinese Navy ships.

About 200 meters from Pumicpic’s boat, another fishing vessel manned by Filipino fishermen was moored near the shoal.

“We are here only to fish. Let’s not do anything that will make the Chinese angry,” Pumicpic said.

As long as Filipinos can freely fish near the shoal, there is nothing wrong with Chinese vessels patrolling the area,

“If the Chinese coast guards won’t harass and drive us away, I don’t have any problem concerning their presence here,” he said.

But unlike Pumicpic, most of his crew members want all the Chinese vessels to leave the shoal.

“Scarborough Shoal is ours. Those Chinese should not be here. This is still our territory,” fisherman Francisco Fiehl, 41, said, adding that he believed China was not sincere when it allowed Filipino fishermen access to the shoal.

“China is just trying to show off. I’m sure the Chinese coast guards will again chase us away in the coming days,” Fiehl said.

Pumicpic and Fiehl were among the Filipino fishermen who had experienced harassment from Chinese patrols.

They recounted incidents in 2015 when their fishing boat was rammed and damaged by Chinese boats as they approached the shoal.

Fiehl said the Chinese also attacked them at night, driving them away by blinding them with laser devices and powerful lights.

China, which claims nearly the whole South China Sea, seized the shoal from the Philippines after a two-month standoff in 2012. It cordoned off the shoal and drove away Filipino fishermen.

Without military muscle to defend its territory, the Philippines challenged China’s excessive claim at the UN-backed Permanent Court of Arbitration in The Hague.

On July 12, the court handed down its decision, saying that China’s claims had no basis in international law and that it had violated the Philippines’ rights to fish and explore for resources in waters within its 370-km exclusive economic zone (EEZ).

China, which did not take part in the arbitration, rejected the ruling, insisting on bilateral negotiations to settle the dispute. 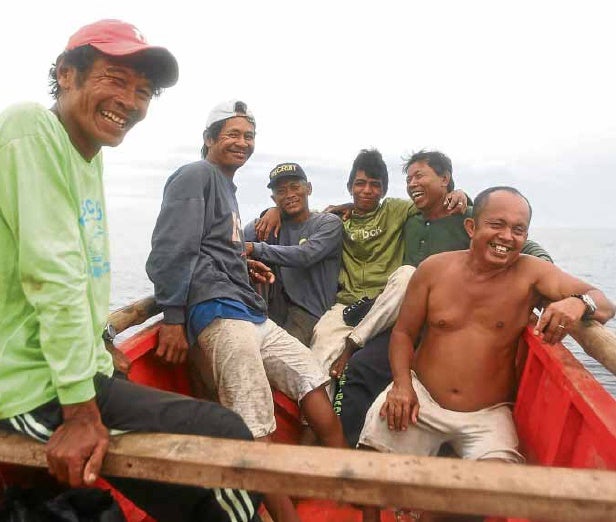 BACK FROM PANATAG Filipino fishermen are thankful that they were not harassed by Chinese coast guards when they returned to their traditional fishing ground at the disputed Panatag (Scarborough) Shoal off the coast of Zambales province. —REMZAMORA

Last month, President Duterte traveled to Beijing to begin repairing ties that had been frayed by the dispute.

He emerged from his meetings with Chinese officials with $24 billion in loan pledges for infrastructure projects and a “friendly understanding” that Filipinos could fish again at Panatag.

On Oct. 25, eight groups of Filipino fishermen were able to sail close to the shoal, without drawing reaction from Chinese coast guards in the area.

The shoal is located 230 km off the coast of Zambales pro-vince, well within the Philippine EEZ, but the Hague court did not settle the question of ownership, saying only that being a common fishing ground, Panatag is open to all.