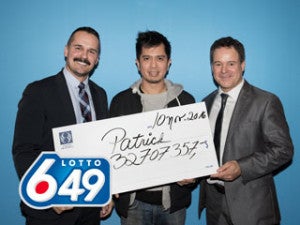 SAN FRANCISCO – A Filipino who lives in a rooming house in Montreal, Quebec, Canada and works two jobs took home a whopping $32,707,357 as the jackpot winner of the November 9 Lotto 6/49.

Patrick Estacio, 41, came to Loto-Québec headquarters on November 10, at the end of the business day. He told lottery officials that he thought his prize was $32,000, until a customer service staff member informed him that he had actually won a quite a bit more.
Estacio, who chose the winning combination 06-09-30-37-43-49, said he was on his way to work when he decided to have his lotto ticket validated. He bought the ticket from Tabagie Métro Du Collège (1480 Rue Cartier, Saint-Laurent), which will receive a $327,073 commission, equal to 1 percent of the prize.
“When I learned that I had won $32.7 million, I burst into tears of joy. I work two jobs to make ends meet. I still haven’t taken it all in, but my life will certainly never be the same. I want to stay humble, simple, but I am going to take advantage of my good luck. I’ll probably buy a house or a condo. For the rest, we’ll see. I don’t know. I’m going to let the dust settle,” he told Loto-Quebec officials.