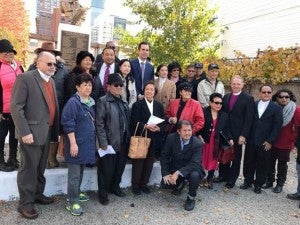 NEW YORK CITY – Filipino American veterans of all wars were honored in a simple ceremony on Veterans’ Day November 11 at the Philippine Plaza in Jersey City, New Jersey.

Jersey City is home to one of the largest concentrations of Filipinos and Filipino Americans in the US.

Flor Medel Reyes, Founder and CEO of Philippine Plaza, Inc., welcomed all guests and community members who gathered at the Philippine Plaza dedicated to Filipino American veterans of all wars and military campaigns in the 20th and 21st centuries. 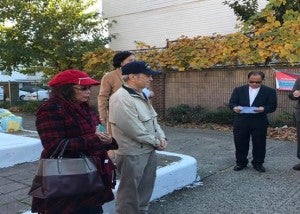 Nestor Enriquez, a Fil-Am veteran of the Korean War spoke about the challenges of serving in a submarine during wartime and of the tremendous sacrifice made by his comrades to preserve democracy.

In her message, Consul General Theresa Dizon-De Vega reaffirmed the Consulate General’s commitment to support ongoing efforts to secure more benefits for Filipino-American veterans and their families, including securing passage for the Filipino Veterans of World War II Congressional Gold Medal Act of 2015 as well as monitoring the progress of the US Citizenship and Immigration Services (USCIS) Parole Program for families of veterans.

Jersey City Mayor Steve Fulop and the first-ever Filipino American City Council President for Jersey City Rolando Lavarro, along with other Council members and officials attended the ceremony to pay tribute to veterans.

Fulop, himself a veteran of the Iraq War, conveyed the Jersey City government’s commitment to assist veterans and the Filipino American community in general.