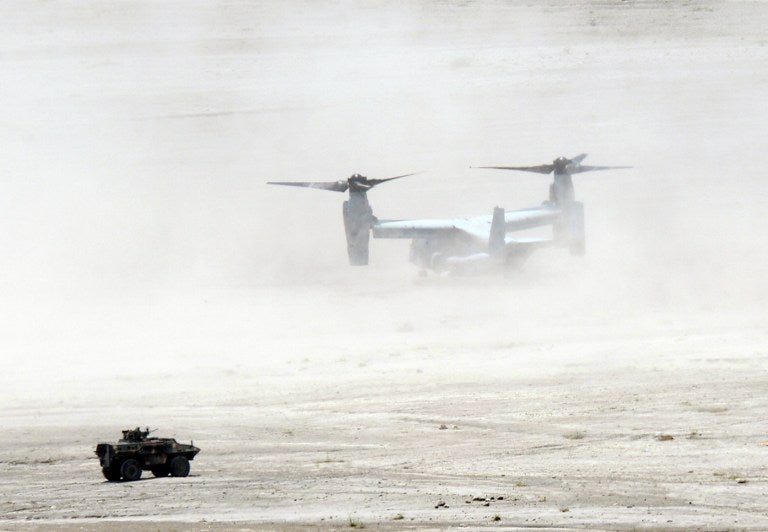 A US air force V-22 Osprey unloads Philippine marines during live fire drills of the annual US-Philippine joint military exercise at the former US target range in Crow Valley, Capas, Tarlac, on May 15, 2014. US Pacific Command chief Harry Harris says the US is eyeing bigger military drills in the the Philippines despite a pronouncement of President Rodrigo Duterte that he was ‘separating’ from the States. AFP FILE

WASHINGTON, United States — Military cooperation between the US and the Philippines is unchanged for now despite inflammatory statements from the Filipino president directed at US President Barack Obama, a top American commander said Tuesday.

President Rodrigo Duterte has voiced willingness to request the withdrawal of American troops from his country.

“Despite what he has said, there has been no change in anything with the Philippines,” said Harry Harris, commander of the US Pacific Command, during an event in Washington.

Harris was slated to participate Tuesday in high-level meetings between the two countries to schedule joint military exercises for 2017 and after.

“I am optimistic,” he said of the meetings, adding that thus far the exercises program has been on track.

Harris said there could be “a refocusing or a rescoping of some of the bigger exercises in 2017.”

Harris said there could be “a refocusing or a rescoping of some of the bigger exercises in 2017.”

Until Duterte came to power in June, Manila was one of the United States’ closest allies in Asia, and it was viewed as a vital link in the political “pivot” or “rebalancing” of US policy toward the Asia-Pacific region under Obama.

The Philippines had agreed to allow the United States to use five of its bases, and Harris said “that has not changed so far and I have no reason to believe it will change.”

“We haven’t been asked to remove US forces,” he said, notably those operating against Muslim separatists in the southern island of Mindanao.

“We haven’t been asked to remove US forces,” he said, notably those operating against Muslim separatists in the southern island of Mindanao.

He also said the Philippines had not asked Washington to stop keeping surveillance planes at Clark Air Base on Luzon Island.

Late last month, Duterte announced his country’s “separation” from the United States and called for an end within two years to the presence of “foreign military troops” — a clear reference to American forces.

Duterte later struck a more conciliatory tone, saying there would be no “severance of ties” with Washington. He added that  Manila would simply pursue a more independent line in foreign affairs while improving its ties with Beijing.  CBB