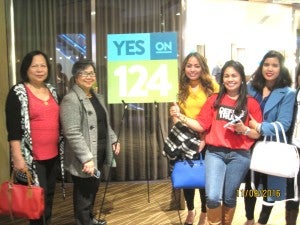 Members and Unite Here Local 8 Staff ready to celebrate the victory of the passage of Initiative 124. INQUIRER/Cindy Domingo

SEATTLE – At the Westin Hotel here the atmosphere was somber on Election Night as Democratic Party supporters eventually came to grips with Donald Trump’s victory. But in a small hospitality room on the first floor, a clutch of women Filipino hotel workers from Local 8 Unite Here were all smiles at news that their Initiative-124, titled “Seattle Protects Women,” was passing with 77 percent voter approval.

The multiracial crowd of Latinas, Asian Americans, African Americans and whites broke into screams of joy and applause. 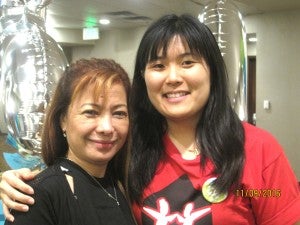 lora Tabalbag, housekeeper at Westin Hotel and Eunice How, organizer at Unite Here Local 8 worked as a team to get Westin Hotel workers to vote yes on Initiative 124. INQUIRER/Cindy Domingo

For Filipina Flora Tabalbag, a Westin Hotel employee for 30 years, this was the first time she voted in an election, and it was because Initiative-124 was on the ballot. Although the conditions she faces at work as a union member are fairly good, Flora was happy because they would be even better as a result of the initiative’s passing.

Another Filipina housekeeper who works at the Doubletree Hotel, Alicia Espejo, stated, “This is for everybody who is not able to speak out.”

The initiative’s provisions will apply to all hotel workers of hotels of a certain size whether represented by a union or not. Eunice How, local Unite Here organizer, estimates that there are 5,000 unionized hotel workers in this area, many of whom are Filipino.

Initivative-124 or I-124 will go into effect by the end of this year. It will protect hotel workers from sexual harassment and assault, improve access to affordable family medical coverage and provide basic job security and limited workloads.

Currently, as many as 7,500 low-wage workers in Seattle are employed by the hotel industry with 80 percent women, the majority of whom are women of color and immigrants. There is a projected growth by as much as 30 percent in the next five years, and hotels are hitting record occupancy as Seattle’s economy booms.

In a 2012 report on the hotel industry by Seattle organization Puget Sound Sage states, “The Hilton ‘Serenity Bed’ mattress, for example, weighs 113 pounds with linens weighing 16 pounds. A typical housekeeper cleaning 15 rooms a day, strips over 500 pounds of soiled linen and replaces it with 500 pounds of clean linen, and lifts a mattress over 60 times in one day.” 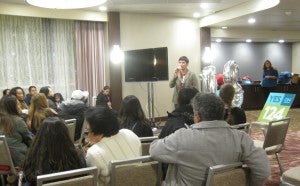 The vice president of Local 8 Unite Here talking to the crowd waiting for the results of the vote on I-124. INQUIRER/ Cindy Domingo

The report also states that according to the Bureau of Labor hotel and motel worker injuries in 2000 were higher than workers in the coal mining and building construction industries. I-124 would lower housekeeper injury rates by reducing unsafe housekeeping workloads and slowing down the pace of work.

Furthermore, the initiative limits the guest room area a hotel housekeeper is required to clean in an eight-hour shift to roughly 15 rooms with further reductions for strenuous room cleanings and provides time-and-a-half pay for additional square footage above the maximum.

However, the initiative’s most important provisions are the ones providing protection from sexual harassment and assault. In a Seattle poll of hotel workers, 50 percent reported having been sexually harassed by hotel occupants.

Tabalbag remembers two incidents involving men in their hotel rooms. The usual practice of housekeepers is to knock on the hotel room doors to see if they could enter the room. Once, after she knocked on the door, an angry white male answered naked, screaming, “What do you want?” Scared, Tabalbang apologized and hurriedly left. In another incident, a male occupant propositioned her as if she was a prostitute.

Ermalyn Magtuba, a Filipina immigrant who works at Seattle Hilton, has had numerous inappropriate interactions with male guests, including male guests answering the door in their towels or dropping their towels in front of her. I-124 provides panic buttons to workers and requires posting of anti-harassment policies inside all guest rooms.

The hotels must also create a standardized response procedure for employee reports of guest-initiated harassment and assault, including documenting such incidents, banning harassing guests and giving workers advance notice when known harassers return. 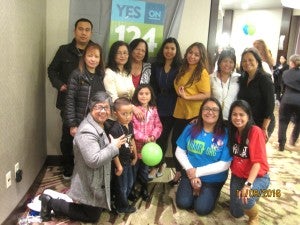 Tabalbag says that she will feel safer with the new panic buttons the housekeepers will wear because security will be able to locate the worker immediately through the GPS mechanism.

Both Tabalbag and Espejo played important roles in mobilizing and educating fellow Unite Here members. They followed up with other workers to register to vote and to get their ballots mailed.

For Espejo, organizing is not a new experience. She said her work on I-124 was a natural extension of her activism in the Philippines dating back to the anti-Marcos movement in the ‘70s and ‘80s. Both she and Tabalbag worked with fellow Filipina Gabby Ibanez-Dacruz, a recent college graduate who was hired to work on I-124 by the Asian Pacific American Labor Alliance – Seattle Chapter.

Like Tabalbag and Espejo, this was Ibanez-Dacruz’ first time to work in an electoral campaign. Ibanez-Dacruz, said, “It was a memorable experience especially when it meant getting workers who had been in the US for years, getting them to vote for the first time and seeing them feel proud that they were doing something important for all hotel workers.”

As a result of her experience in the I-124 drive, Ibanez-Dacruz hopes to work for Unite Here and its civil engagements