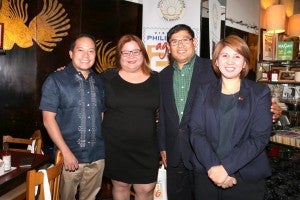 In a meeting with Fil-Am community leaders and members of the media on Nov. 11, Department of Tourism (DOT) officials announced plans to reach out to the estimated four million Filipinos in the US.

The outreach program “will take shape in the next few months,” said Katherine de Castro, DOT undersecretary of Public Affairs, Communications and Special Concerns at the event at LA Rose Café in Los Angeles.

Part of the program is the revival of the Ambassadors Tour, a cultural tour package for Fil-Ams that includes a meeting with the president in Malacanang.

“We will encourage the Filipino Americans to visit the Philippines…so they can hear the president talk and explain his vision to them,” de Castro said.

When asked how the DOT will handle reports of extrajudicial killings and their potential negative impact on the tourism industry, de Castro said they would “work double time” to produce positive stories and reach their target markets through “different forms of media.”

No severance of ties

Many Fil-Ams have expressed concern over the extrajudicial killings and Duterte’s statements that seemed to call for ending relations with the United States.

Duterte later clarified he was calling for a “separation of foreign policy” rather than a “severance of ties” with the US.

He also said he looked forward to an “enhanced Philippines-US relations anchored on mutual respect” when he congratulated US President-Elect Donald Trump on Nov. 9.

Addressing concern over the extrajudicial killings, Consul General Adel Cruz said in the meeting: “We have an active Commission on Human Rights and an active Congress. They are making sure that justice will be served.”

De Castro added that tourists “feel safer now in spite of what we hear,” citing “feedback” from tourists.

US remains a top market

During the meeting, DOT Assistant Secretary Gwen Javier and LA-based Tourism Director Richmond Jimenez reported that as of October this year, the United States remains in the top five markets for Philippine tourism.

“Di pa rin bumababa (The visitor rate for the US has not gone down)” in spite of the negative reports, Javier said. However, statistics supporting their claim were not made available during the meeting.

To help create positive publicity for the country, de Castro said they have reached out to the Los Angeles Times, BuzzFeed and Google, inviting them to visit and “experience the Philippines.”

To generate more tourists, Jimenez said they have been joining more travel consortia, including Signature Travel Network. They are also participating in promotional events, such as the Diving Equipment and Marketing Association show in Las Vegas this week.

De Castro said they are all set to launch a new tourism campaign in time for the Miss Universe pageant in January, which is expected to attract worldwide attention.