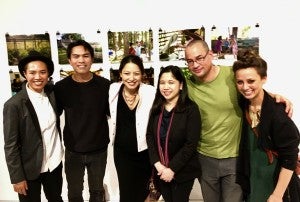 NEW YORK CITY — Two non-profit organizations that came together as “social impact innovators” after the advent of Haiyan or Typhoon Yolanda in 2013 held an art exhibit-fundraiser to help continue their work of building classrooms, specifically providing chairs and furnishings, in the Philippines.

Advancement for Rural Kids, Inc. (ARK) and cross-cultural learning stalwart Global Playground, builders based in DC, worked with communities in Capiz to rebuild classrooms destroyed by the strongest typhoon that hit the country.

The Chelsea art exhibit entitled BAHAY opened Nov. 11 to patrons who donated $55 per guest for the cause. The fundraiser features the art works of Maia Cruz Palileo, Alan Calpe, Filipino-Canadians Sara Jimenez and David McQueen.

Proceeds from the sale of their works will go to more classrooms, chairs and furnishings. 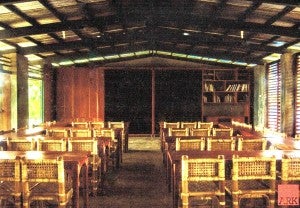 Classrooms built by ARK feature integrated water catchments and ecological filter systems as sources for clean drinking water and were designed by Scale Studio in close collaboration with the local community. CONTRIBUTED

Vera-Yu reported that from December 2015 to April 2016, they completed a total of 13 classrooms in Capiz, including the repair of roofing of classrooms damaged immediately after Typhoon Yolanda. 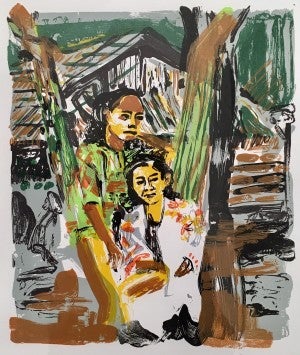 Breaching Pod (middle) by David McQueen is assembled from wood, resembling boats that drift to the ocean. Two Women by Maia Cruz Palileo (left) is a silkscreened art and mixed media depicting her own mother and a friend during her visit to the Philippines. Ossuary 7 (right) by Sara Jimenez is a sculpture-painting and collage of photos and writings from a turn-of-the-century archive about immigration. She used plaster to affix the images, broke them and pieced them back. INQUIRER/Carol Tanjutco

The feeding program introduced by ARK seeks to prevent hunger and deliver nutritious food at a minimum cost of Php 2 pesos per meal. It is a collaboration of parents, teachers and the community, utilizing vacant lands to plant vegetables and other produce, without harmful chemicals. 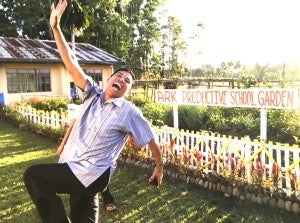 ARK’s Lunch is school-based, eliminates hunger and delivers nutritious meals of fresh, organic vegetables and protein at a minimum cost of Php 2 pesos per meal to ALL students every school day. It buys from parents and the local farmers, creating new and much needed income. It is supplemented by the school garden that parents develop from idle land and operated by the parents in the kitchen that they build on their own time and dime.

In addition to the feeding and classroom programs, ARK and its volunteer designers demonstrate the value of art to the rural children. David McQueen showed them woodworks and sculpture, inspiring rural kids to dream beyond their economic challenges.

Ayesha pointed out, “It is amazing to see the light in their eyes, you can’t put a price tag on art. It is the first thing cut out in a school budget.” She concluded that the communities are happy and proud of their work.