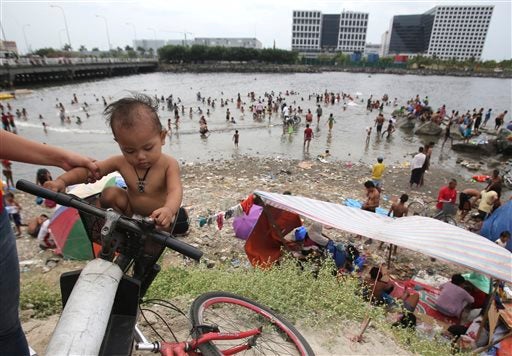 A Filipino baby plays on a bike as people hit swim in the polluted waters of Manila’s bay, Philippines. Despite a city-imposed swimming ban, many poor Filipinos swam along the bay to cool themselves from the summer’s sweltering heat. AP

Governments from across Asia-Pacific recently held a meeting to discuss ways to advance children’s rights in a number of critical areas. The event, ‘A Billion Brains: Smarter Children, Healthier Economies’, was hosted by the Government of Malaysia. It brought together heads of state and senior leaders from 28 countries across Asia-Pacific, which is home to more than one billion children, or nearly half the world’s under 18s.

The meeting sought to foster ‘South-South cooperation’ – countries learning from others that have faced similar challenges, in order to make progress for children. Governments looked at three specific focus areas: social protection, ending violence against children, and providing universal healthcare. Their discussion was informed by three expert reports – one on each focus area – that examined the evidence and data and make recommendations for future action. All three concluded that investments made now in these areas will make a significant contribution to the region’s future and its prosperity.

“Human capital development is a critical enabler for driving and sustaining economic growth,” Malaysia’s Minister of Women, Family and Community Development, YB Dato Sri Rohani Abdul Karim Rohani, said. “In the 11th Malaysian Plan, the Government of Malaysia has outlined the framework to make sure that the availability of a skilled workforce is in place as it is necessary to support the transition of all economic sectors towards knowledge-intensive activities, drive labour productivity gains, and attract investment into Malaysia.”

“The Asia-Pacific region represents an incredible pool of untapped human capital – the brains, and the futures, of one billion children. Those upon whom we are all counting to help shape a better, more sustainable future for us all,” UNICEF Deputy Executive Director Omar Abdi said. “Earlier this month, new statistics were released, showing that some 43 per cent of children under the age of five in low and middle-income countries are at risk of not achieving their full cognitive potential. No country can risk losing the brain potential of nearly half of its youngest citizens, low and middle-income countries least of all, and least of all now.”

Addressing childhood and parental vulnerability and disadvantage contributes to economic growth, and the best way to do this is for greater investment in social protection programmes. The paper, ‘Cognitive Capital: Investing in Children to Generate Sustainable Growth’, finds that investments in children, particularly in the earliest years, also yield dividends in realising human rights, reducing inequality and preventing deprivation and economic stagnation.

There is clear evidence that cognitive ability is markedly affected by childhood circumstances, right from the point of conception. Children who experience good nutrition, stimulation and supportive and secure environments are most likely to reach their full cognitive potential.

Investments that raise cognitive capital – the capacity of people to think and learn and work together – will help sustain and grow economies. In modern economies and societies, cognitive capital underpins creativity and flexibility and determines human capability.

Violence against children is fundamentally wrong, against international law, and is a tragedy for every child affected. In addition to the moral case for action, research shows that there is also an economic and public health cost.

The paper, ‘Preventing Violence against Children and how this Contributes to Building Stronger Economies’, finds that violence remains a common experience in the lives of children. It is estimated that more than one billion children are exposed to violence every year, with the greatest burden falling on the Asia-Pacific region.

Experiencing or witnessing violence in childhood can have a long-term harmful impact on individuals. It also undermines countries’ social and economic development through an increased burden on health care systems, higher levels of violence and criminality, disability and even death. UNICEF research shows that child maltreatment costs countries in East Asia and Pacific US $209 billion/year, equivalent to 2 percent of the region’s combined GDP.

All governments in the region have signed the UN Convention on the Rights of the Child, which commits them to protect children from violence, abuse and maltreatment. More needs to be done to meet these commitments, including greater investment in social services.

For every 10 percent gained in life expectancy, economies can expect a boost of 0.3 to 0.4 percent in annual growth. Investments in good quality primary healthcare, including ensuring there are well-trained healthcare workers and family doctors within easy reach of all women and children, must be a priority for any universal health coverage scheme. This makes sound economic sense.

‘A Billion Brains: Smarter Children, Healthier Economies,’ is the third High Level Meeting (HLM) on South-South Cooperation for Child Rights in Asia and the Pacific. These meetings began as a forum to strengthen child rights and establish effective cooperation for the benefit of children across the Asia-Pacific region. The first HLM was hosted in Beijing in 2010 and the second in New Delhi in 2013. UNICEF is a partner in the HLM process and supports cooperation between countries to promote the fulfilment of children’s rights.

A unique element of the third HLM is the direct inclusion and contribution of young people. An ‘Innovation Challenge’ was issued prior to the meeting calling for young people to share their ideas to address challenges around the key themes of social protection, ending violence against children, and providing universal healthcare. Over 660 submissions were received from across the region and the top three ideas will be presented at the meeting, to help win support and turn them into action.