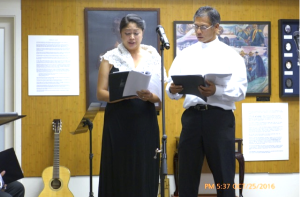 SAN FRANCISCO – A reading from a dramatic adaptation of Jose Rizal’s Noli Me Tangere brought to life some scenes from the history-changing novel.

“Reading of Scenes from a Dramatic Adaptation” by Roger P. Olivares of Noli Me Tangere was held Oct. 25 at the Philippine Center, Philippine Folklife Museum on Sutter Street.

The author of the dramatic presentation, Rogelio “Roger” P. Olivares, is a graduate of the Ateneo de Manila University (AB Economics), a Fulbright scholar and a graduate of the University of Illinois (MS in Communications). He is best known for his novel Noli Me Tangere 2 and for writing the first travel guidebook in the Philippines, Roger’s Do It Yourself Tours.

Noli Me Tangere (Touch Me Not) one of the famous novels by the Philippine’s national hero, Dr. Jose Rizal was published in Berlin, Germany in 1887. This novel, together with El Filibusterismo, also written by Dr. Rizal inspired and sparked the Philippine revolution against the Spanish government in 1896.

In the reading, the scene was the return of Juan Crisostomo Ibarra from Europe who learns about his father’s tragic death and the history behind the animosity held against him by Fr. Damaso Vardolagas, who sabotages his wedding to his beloved Maria Clara. Fr. Damaso harasses and humiliates Ibarra at every turn. Another religious figure, Padre Salvi, also becomes Ibarra’s enemy, who attempts to kill him and stages an uprising where Ibarra is implicated.

“A passionate love story set against the ugly political backdrop of repression, torture and murder. The first major artistic manifestation of Asian resistance to European colonialism, and Rizal became the guiding conscience and martyr – for the revolution that would subsequently rise up in the Spanish province.” (Excerpted from the back cover of the Penguin Classics publication)