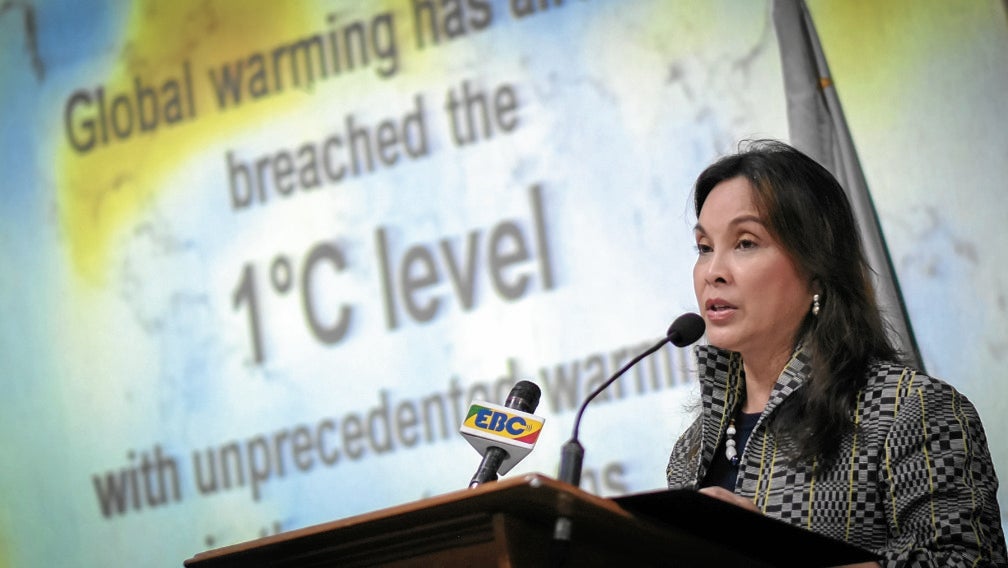 MANILA, Philippines — Sen. Loren Legarda on Tuesday welcomed President Duterte’s vow to ratify the historic Paris climate agreement despite his earlier hesitation as she promised to push for the Senate’s concurrence.

“I thank the President for declaring that he will ratify the Paris Agreement. I thank the members of the Cabinet too for seeing the importance of upholding the treaty,” said Legarda, chair of the Senate committee on climate change.

She said the President’s commitment to ratify the global agreement, a change of heart from earlier declarations not to honor the pact, was especially significant as the country marked the third anniversary of Supertyphoon Yolanda (international name: Haiyan), which happened just as world leaders held climate talks in Warsaw in 2013.

“The pronouncement is likewise timely as we commemorate the third anniversary of Supertyphoon Yolanda, which was one of the rallying points for a more ambitious Paris Agreement,” said Legarda, a United Nations Global Champion for Resilience.

Mr. Duterte earlier refused to ratify the landmark climate deal, a 197-nation pact that aims to limit carbon emissions to contain global warming below 2 degrees celsius, past which point the temperature rise will
become irreversible.

The President had worried that the agreement’s carbon emission caps could inhibit the Philippines’ road towards industrialization, but he changed his mind and announced on Monday that he would ratify the pact just as it came into force.

The agreement gives disaster-prone nations access to an annual $100 million funds obligated to be pooled together by developed countries to support “capacity-building and technology transfer for adaptation and mitigation efforts.”

Legarda said the President’s decision was just the beginning. She called on the Climate Change Commission to step up efforts towards enforcement, and on local government units to craft their local climate change action plans (LCCAP) for organized response and mitigation.

“Following the ratification of Malacañang, the Senate will have to concur. But along with the ongoing process of ratification, we must continue to mobilize urgent climate action, plot a roadmap to resilience, and capacitate LGUs in crafting their LCCAPs and in accessing the People’s Survival Fund,” Legarda said.

“After ratification, we can be a strong voice in the world to fight for climate justice. The Philippines can lead vulnerable nations to compel developed countries to comply with their commitments to reduce emissions,” she said.  SFM