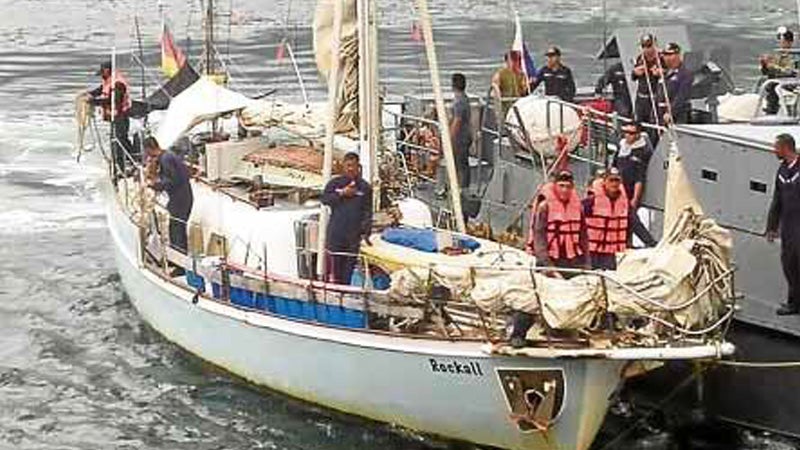 Navy personnel board the yacht ” Rockall ” after itwas recovered off Laparan island, in Sulu. Abu Sayyaf bandits killed a German woman and abducted her elderly male companion from their yacht. —AFP

On Monday, it was learned that Sabine Merz was his wife who, according to the Abu Sayyaf, was killed on Saturday when she tried to shoot members of the rebel group.

“Our men shot back and killed her,” Muamar Askali alias Abu Ramie, the self-proclaimed spokesperson of the Abu Sayyaf, told the Inquirer.

Ramie said they chanced upon the couple onboard their yacht cruising the water of Tanjong Luuk Pisuk in Sabah.

The shooting happened somewhere in Tawi-Tawi, according Askali.

Villagers reported finding a dead woman lying beside a shotgun on board a light blue yacht with the German flag and marked “Rockall” off Laparan Island in Sulu, Tan said.

The Task Force Tawi-Tawi recovered the light blue yacht in Laparan Island in the Pangutaran town of Tawi-Tawi on Sunday.

Maj. Filemon Tan Jr., spokesperson of the military’s Western Mindanao Command, said the body of a female foreigner, believed to be in her 50s, was found inside the yacht.

“The body sustained gunshot wounds and some bruises. A shotgun was also recovered beside the woman’s body,” Tan said.

Tan said the passports of Kantner and Merz were found on the Rockall. He said the photo in Merz’s passport appeared to match the body of the dead woman aboard, although her identity still needed to be confirmed.

“The body was brought to Zamboanga for autopsy,” Tan said.

“What’s alarming is that the body was naked and had several contusions in the face and was possibly raped,” he said.

He said the military had listened to an audio recording of a known Abu Sayyaf leader claiming responsibility for the raid on the yacht, and the abducted German man also spoke on the phone call.

It was not the first time the Kantners were held captive.

An Agence France-Presse report said they were also held hostage by Somali pirates in June 2008, and were freed 52 days later.

AFP interviewed Kantner and his wife, Sabine Merz, in 2009 about their ordeal when they returned to Somalia to retrieve their boat.

Despite being subjected to a mock execution during his ordeal, Kantner said the threat of kidnapping would never stop him from sailing. —WITH REPORTS FROM JULIE ALIPALA, AFP AND AP