LOS ANGELES — In Los Angeles’ Historic Filipinotown district, a small lot on Beverly Boulevard, between South Union Avenue and Union Place, known as Unidad Park is the site of one of the most significant landmarks for the Filipino American community.

It’s where the nation’s largest Filipino American mural stands, colorfully packed with people and moments central to the community’s history. 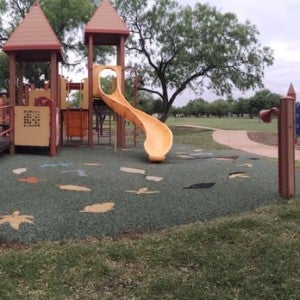 Unidad Park has amenities like a playground for kids. YELP

“For me, that big mural is doing a great job in showcasing our history and culture and contributes in making Unidad Park an icon of Historic Filipinotown,” says Perla Santos, who attended meetings years ago that led to the creation of the park.

In the early ’90s, the site of Unidad Park was owned by the Chuateco family, a Filipino family that allowed it to be developed into a community garden that was accessible not only to Filipinos, but also to the greater community.

Years later, the family sold the property to the Los Angeles Neighborhood Land Trust, after which it was developed into Unidad Park.

Long involved in the process was Search to Involve Pilipino Americans (SIPA), a non-profit organization that seeks to enrich and empower generations of Filipino Americans through a number of services and programs.

The organization assisted with the operation of the community garden decades ago, and partnered with the Social Public Arts and Resource Center and Eliseo Silva to develop the mural now at the park.

With Filipino American history not taught in schools, Gintong Kasaysayan, Gintong Pamana serves as a history lesson in and of itself, said Joel Jacinto, commissioner at the Los Angeles Board of Public Works and former executive director of SIPA.

“Because we’re not in history books in the public school system throughout America and especially in Los Angeles, the mural is so important because it tells us about our own history. Bias from our own lens,” Jacinto says.

“It’s not complete because there’s so much of Filipino and Filipino American history to include. But on a 125-by-45-foot high wall, you can’t get much more inclusive than what is on that mural,” he adds.

Among important individuals showcased on the mural are labor leader Larry Itliong, who initiated the Delano Grape Strike in 1965, and Ben Cayetano, who became the first Filipino American to be elected governor when he was voted into the position in Hawaii in 1994. 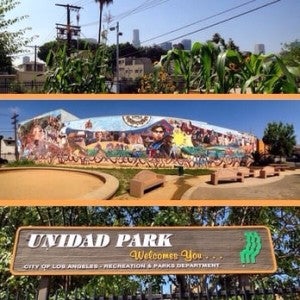 Unidad Park is also popular with the Latino community. YELP

And it’s not just the mural that’s culturally significant at Unidad Park. Also on site is a dap-ay, which is a circular gathering place found in Cordillera mountain villages in Northern Luzon, Philippines.

But apart from features that highlight Filipino American characteristics, the park includes other amenities, such as a community garden and a playground.

Unidad Park is owned by the City of Los Angeles and sits in the heart of Historic Filipinotown, which has become home to many Latino families. But it still remains a crucial component of Filipino-American and Los Angeles history.

“My hope at least is that the community at large — not just Filipinos, but everybody –continues to utilize Unidad Park as a way to come together to manifest and realize the potential of its name in bringing unity and collaboration and co-existence to the community,” Jacinto says.