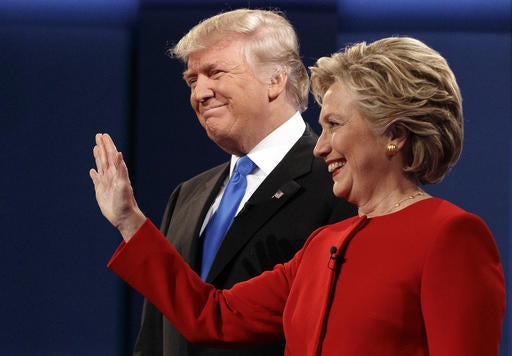 LOS ANGELES—With just a few days left before the US presidential elections, Filipino-American supporters of Democrat Hillary Clinton and Republican Donald Trump are knocking on doors, texting, e-mailing and making phone calls to get more votes for their candidates.

As the most recent polls show a narrowing race, both camps are reaching out to Fil-Ams and other Asian Americans in battleground states, including Nevada.

“Every single vote can make the difference,” said Los Angeles resident Erlinda Granada, who just returned from a trip to Las Vegas in Nevada, where she and a busload of Fil-Ams and Korean Americans from California manned phone banks and went door to door asking fellow Asian Americans and Pacific Islanders (AAPIs) to vote for Clinton.

Studies have shown that Fil-Ams, the largest Asian ethnic group in Nevada, combined with other AAPIs have the power to swing elections in that state. AAPIs, including around 120,000 Filipinos, comprise about 9 percent of Nevada’s electorate.

A national survey released last month showed 54 percent of Fil-Ams would vote for Clinton and only 25 percent favored Trump. But it also indicated that 70 percent of Fil-Ams had not been approached by either the Democratic or Republican party, which could mean the game was far from over.

Refusing to be discouraged by the survey results, the Republican National Committee (RNC) has since ramped up its Fil-Am outreach efforts.

“We continue to build strong relationships with Fil-Am community organizations, leaders, and Republican-elected officials to ensure Fil-Ams have a voice in our electoral process,” Fetalvo said.

Fil-Am businesswoman Lisa Melanie Noeth, a Trump supporter in Las Vegas, said she had volunteered to knock on doors days before the election.

“The last few days are crucial,” she said. “We have been working hard to spread the Republican Party’s values of defending our freedom, faith, and economic opportunities to bring jobs and prosperity to Filipino-Americans and voters across the nation.”

The Democrats, however, seem to be ahead of the game. The Clinton campaign appointed a Fil-Am, Jason Tengco, as its AAPI outreach director. Tengco has led programs reaching AAPI voters in unprecedented ways, including advertisements and other campaign materials in Asian languages, including Filipino.

“Secretary Clinton understands the importance of the AAPI community,” he said.

Trump, on the other hand, has made statements that were hostile to immigrants and minorities, driving away many AAPIs, said Art Garcia, a Clinton supporter who leads the Justice for Filipino American Veterans.

“We know he is anti-immigrant, so why should we immigrants vote for him,” he asked.

Garcia said what hurt Trump’s chances with Fil-Ams the most was when he suggested cutting off immigration from the Philippines, a longtime US ally, because it’s a “terrorist nation.”

This was echoed by Fil-Am community leader Loida Nicholas Lewis, who told the New York Times on Facebook Live on Wednesday (Thursday in Manila) that “[Clinton] knows us, the Filipino Americans… the other candidate does not, calling us terrorists.”

“He has no regard for people other than himself, his color and his group,” Lewis said.