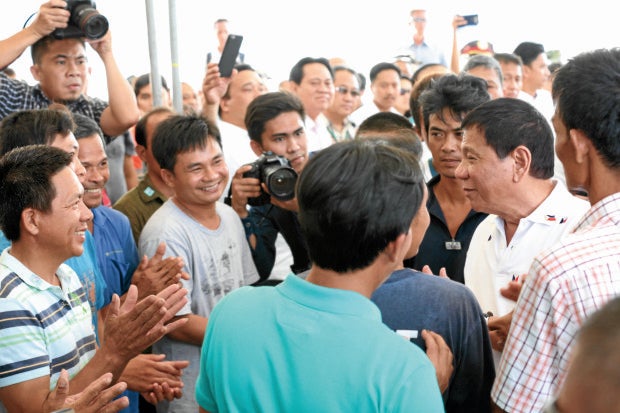 FAREWELL CHAT President Duterte bids farewell to 17 Vietnamese fishermenwho were caught fishing off Ilocos Sur province
after charges of poaching against them were dismissed by the provincial prosecutor. —JOAN BONDOC

In a speech he gave before bidding farewell to the Vietnamese fishermen, who left in three vessels, Mr. Duterte credited Vietnam for defeating the United States in the Vietnam War.

The Philippine Navy and the Bureau of Fisheries and Aquatic Resources filed charges of poaching against the Vietnamese fishermen in September.

The charges, however, were dismissed by an Ilocos Sur prosecutor in Vigan City. The prosecutor accepted the fishermen’s story that they were forced to cross into Philippine territory to avoid Typhoon “Ferdie,” according to Bureau of Immigration Commissioner Jaime Morente.

The Vietnamese vessels were caught by the Navy near Santa Catalina town in Ilocos Sur on Sept. 8.

Mr. Duterte said geopolitics had victimized smaller countries like the Philippines and Vietnam because developed nations like the United States “want to control both sides of the Atlantic and Pacific Ocean at the expense of developing nations.”

“That is how geopolitics is being played out,” he said.

But Asians, he said, understand what is more important: self-respect and dignity.

“When I conversed with the leaders of Vietnam, we whispered,” which is how Asians express respect for others, Mr. Duterte said.

He said he had promised to expedite the release of the Vietnamese fishermen in his talk with Vietnamese President Tran Dai Quang.

“I told him to give me time. I can’t do it in a jiffy. Now, I am happy to send off my fellow human beings home,” he said.

Social Welfare Secretary Judy Taguiwalo said she hoped the Philippines and Vietnam would reflect on their “shared histories and build stronger ties of unity.”

“In dealing with neighbors—Vietnam is our neighbor—we deal with each other as human beings with common needs and wants,” she said.

The Vietnamese fishermen had been staying on their boats, aided by a local community of Vietnamese migrants in Vigan City and Sual town, said Tran Mihn Dung, who was sent here by the Vietnamese Embassy.

Sual Mayor Roberto Arcinue said the fishermen were allowed to buy water, food and other provisions in the town. “But they are eager to go back to Vietnam where they have families,” Tran said.