Duterte to FVR: Thank you but I must do it my way | Global News
Close
menu
search

Duterte to FVR: Thank you but I must do it my way 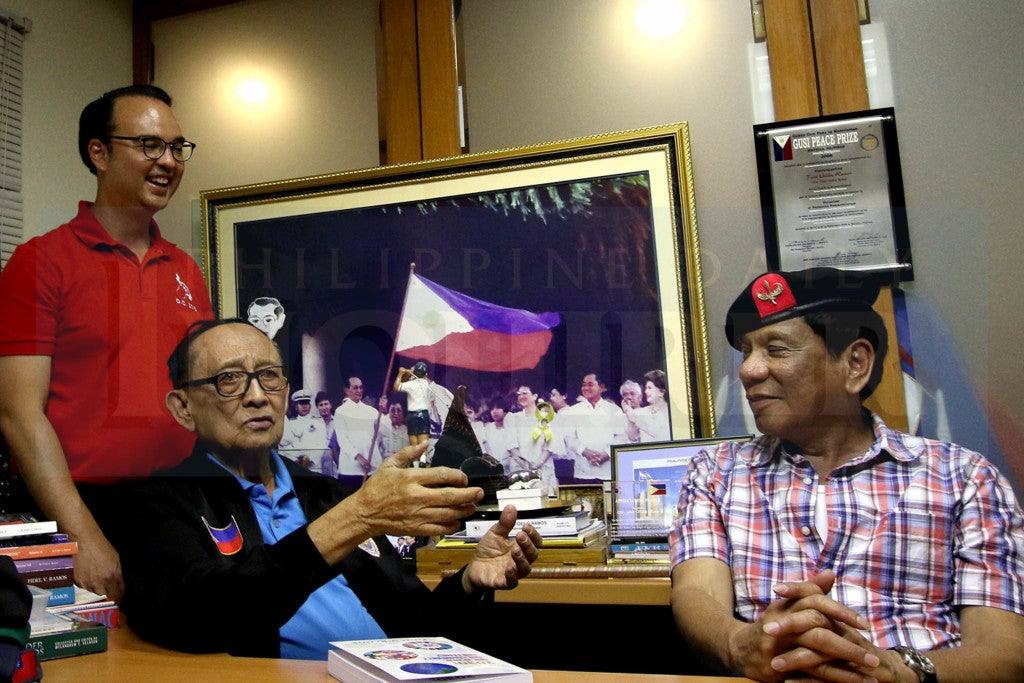 In this March 7, 2016 file photo, former president Fidel V. Ramos is seen meeting with then presidential candidate Rodrigo Duterte. Duterte won the May 9, 2016 polls and is now the President. (INQUIRER FILE PHOTO/RICHARD REYES)

MANILA — President Duterte has acknowledged his differences with former President Fidel Ramos, who had relinquished his post as special ambassador to China following his biting rebuke of the President’s anti-US remarks and his opposition to the Paris Agreement on Climate Change.

Speaking with reporters on Tuesday night, the President admitted that his tongue-lashing of the United States did not sit well with the former president, whom he had repeatedly credited for his win in the May 9 balloting.

He said he had read Ramos’ resignation letter and accepted his decision, but maintained he would still seek advice from the 88-year-old leader.

“I’d like to thank him for helping me and being of the service to the nation even at his age,” Duterte said in an interview after visiting his parent’s mausoleum in Davao City.

While he recognized Ramos’ wisdom, the Chief Executive said he had his “own way of assessing” issues concerning the country’s affairs such as climate change.

The President said he also understood why Ramos did not like his scathing statements against America, pointing out that Ramos was a product of the premiere military school West Point, or the United States Military Academy, in New York.

“For me, it’s a matter of honor. We don’t agree on that matter,” Mr. Duterte stressed. “It is alright for America to criticize me on the issue of extrajudicial killings… What I don’t like is America’s treatment of us. They treat us as if we’re very desperate.”

“I know he’s pro-Western because he’s from the military. He really did not want to fight with them. But I’m different. And so is Ramos,” he said.

“Maybe Ramos does not like it. We’re different. I did not study abroad. I’m just a local boy. I’m not a military man. I’m just a mayor who became President.”

Asked if there was tension between him and Ramos, the President said: “Of course none.”

In his letter, the former president said he decided to leave his post after Mr. Duterte’s state visit to Beijing three weeks ago “resulted in renewed bilateral relations between our two countries.”

“We’d like to believe that the efforts of our team, of the special envoy, played a modest, but productive role in the breaking of the ice that led to your successful visit,” Ramos wrote.

“This letter is my resignation as your special envoy to China. But more important, it is also an affirmation of my full support of the national interests of our Team Philippines of 100.5 million Filipinos that you now lead,” he added.

Abella said Ramos’ letter showed that both leaders “continue to have a solid and respectful relationship as we course a new phase in our evolution as a nation and Filipino society.”  SFM

Read Next
‘Pisay’ student enters semifinals of global science tilt, asks for help
EDITORS' PICK
Eleazar: PNP open to ICC probe but PH judicial process is working
P258M shabu seized, Chinese national arrested in Manila drug bust
Gilas out to prove Korea win not a fluke; Tab fires back at ‘lucky shot’ remark
SANTIS Delicatessen: The road to survival is sweet and savory
Man wounded as raid on illegal cockfight in Isabela leads to shootout
Piolo Pascual: The Ultimate Heartthrob continues to level up
MOST READ
Palace: Face shields no longer needed to be worn outdoors
LOOK: ‘Low vaccination’ turnout in 4 Manila sites after no walk-in policy
Lacson or Pacquiao a possible presidential candidate for NPC – Sotto
‘Pinadudumi ang politika:’ Sotto wants FB to shut down ‘troll farms’ until after 2022 polls
Don't miss out on the latest news and information.