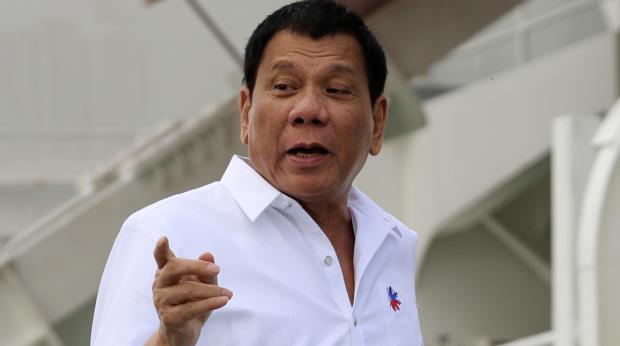 DAVAO CITY — President Rodrigo Duterte shrugged off the US State Department’s decision to stop the sale of 26,000 assault rifles to the Philippines, saying he could buy guns from Russia.

The rifles were supposed to be used by the Philippine National Police but Senator Ben Cardin said he would block the sale because of rising concerns about human rights situation in the Philippines.

Cardin was among US lawmakers, who had criticized the killings blamed on Duterte’s war on drugs.

But speaking to reporters during a visit to his parents’ grave late Tuesday, Duterte said he did not mind the stoppage of the sale, calling it another US bluff.

“Are they scaring me by not selling firearms to us?” he asked.

He said he was not scared because Filipinos could easily produce guns anyway.

“There are a lot of airguns (de bomba) here,” Duterte said in jest.

But on a serious tone, he said Russia could provide what the US wouldn’t give.

“Remember what the Russian diplomat said? Come to Russia. We have everything you need,” Duterte said, recounting his meeting here with Russian Ambassador Igor Khovaev shortly after the May elections.

During that meeting, Duterte and Khovaev agreed to enhance the bilateral relations between the Philippines and Russia.

“Our two countries have a great potential for cooperation in many many fields,” Khovaev told reporters after emerging from that meeting.

He said the relationship between the Philippines and Russia “is really friendly.”

“We have no disputes, no political contradictions or differences,” Khovaev added.

During his visit to Laos for the Asean Summit, Duterte also met with Russian Prime Minister Dmitry Medvedev, whom he said pledged Russia’s help to the Philippines.

In a media statement on Wednesday, Liberal Party Senator Ralph Recto urged the Duterte government to “jumpstart a program to locally manufacture arms and military equipment.”

“It is a wake-up call for us to stop totally relying on foreign suppliers,” he said of the US decision to stop the sale of the rifles to the Philippines.

Recto described the stoppage of the sale as “another kind of pivot we need to tap our domestic industries for the equipment needs of our policemen and soldiers.”

“What is Made in Marikina is as good as what is Made in America,” he said, referring to the products of the Marikina-based Arms Corporation of the Philippines (Armscor).

Armscor also exports its products – including rifles and pistols – to such countries as the US.  SFM