No to the Narcissist, Yes to Hillary 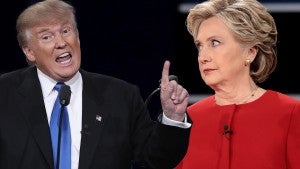 NEW YORK CITY — It is less than a week before the elections to decide who will succeed President Barack Obama, and this dreary, dispiriting, vitriol-laden campaign season will finally be over. Or maybe not, given how that world-class whiner Donald Trump keeps proclaiming that the elections will be rigged—unless of course he wins. (The man is a notoriously sore loser; when he didn’t win an Emmy for “The Apprentice,” this overgrown kid threw a tantrum at being passed over by the judges.)

Such rhetoric of course plays right into the hands of a demagogue like Vladimir Putin—now there’s a man who knows a thing or two about rigged elections—of whom the Donald is a keen admirer. Unwittingly or not, Trump has become a surrogate for the Russian strongman. (U.S. intelligence agencies are unanimous in seeing the Kremlin’s hand in the hacking of the Clinton campaign’s emails, obviously to aid Trump.)

Such parroting of a foreign government’s surreptitious agenda is much more damaging than all the hoopla surrounding the latest tempest in a teapot, about emails in disgraced politico Anthony Weiner’s laptop that may or may not have anything to do with Hillary Clinton’s tenure as Secretary of State. Both Democrats and Republicans, for once in sync, demanded that all pertinent information be released immediately.

Trump, who loves the taste of foot in mouth, immediately claimed that a crime had been committed, without an iota of evidence. But this is not surprising, just as it wasn’t surprising when the man claimed to have witnessed on 9/11 thousands of Muslims in New York celebrating the fall of the twin towers—an out and out fabrication.

What would have been surprising was if he had exhibited the temperament of a judicious, responsible and intelligent candidate for the highest office in the land and postponed judgment until all the facts were known.

But that is not Trump. Hasn’t been. Isn’t. Never will be.

He is many other things, all of which have been amply documented; the most damaging being the Access Hollywood tapes of his lewd boasts, how he could grab women by their genitals, or kiss them without their consent, and get away with it because he was a star. What sort of a father would allow the shock jock Howard Stern to say of his daughter that she was a “piece of ass”?

Here is a man who has called women “dogs,” among other choice epithets.

Here is a man who refuses to release his tax returns, and who in all likelihood did not pay any federal taxes for almost two decades.

Here is a man who has demeaned war heroes and mocked people with disabilities.

Here is a man whose short-lived Trump University was a farce.

Here is a man who would ban Muslims from the country and who called Mexicans rapists.

Here is a man … I could go on but space limitations prevent me from doing so.

Suffice it to say that Trump is a toxic stew of all the latent nativist, racist, misogynistic, bullying, fear mongering sentiments that fester underneath the skin of America, brought to the surface by a still largely white Republican Party that, a lá Dr. Frankenstein, has created this unappealing bundle of ineptitude, an “infinite and endless liar, an hourly promise-breaker,” one who is “highly fed and lowly taught”—to cite just two of the many apt and poetic phrases Shakespeare penned, to fit the multitudes of knaves, villains, and buffoons that this unparalleled genius created for the stage.

By and large, the Republican establishment no longer actively supports what it has created—exactly as Dr. Frankenstein came to fear his unholy creation.

What surprises me is that there are Filipinos, whether born in the Philippines or here, who support him, in spite of the fact that Trump has labeled the Philippines a terrorist nation and is so obviously anti-immigrant and does not repudiate, indeed luxuriates in, the embrace of white supremacists such as David Duke.

Listen up, Pinoys: in case you’ve lived in a cave all these years, white supremacists detest our kind, and other people of color. They would if they could get rid of you and me.

But then again many Filipinos bought into the blatantly racist notion that President Obama wasn’t born in this country, in spite of incontrovertible evidence to the contrary. (I suspect most if not all of them are wannabes whites, unhappy with their skin.) After so many years of keeping this lie alive, Trump grudgingly acknowledge its falsity. Did he apologize? Does the sun set in the east?

And I’m sure this same set of Filipinos applauded the idea of a wall at the country’s southern border, just as surely they applauded his putative ban on all Muslims.

Hillary Clinton has many faults, to be sure. The use of a private email server, for instance, while she was Secretary of State was dumb but she has apologized for this. Nevertheless, as the three debates with Trump have shown and where she bested him handily, she has the temperament, experience, and discipline necessary in being a worthy president of the United States. She has my vote, easily.

On the other hand, if you believe that a first-class narcissist, a legend in his own mind, a con man par excellence (the only time that this laudatory adjective can be paired with his name), with a view of the country and people that they should serve him rather than the other way around, should be president, then the Donald is your man. By the way, in the Trumpian spirit, I have a dynamite real estate deal to offer you: the Brooklyn Bridge can be all yours, at a heavily discounted price.

Read Next
The Rant Race: Duterte vs. Trump
EDITORS' PICK
Mass testing on April 14; but who to test is unclear
Cash aid trickles down to cities meeting DSWD requirements
US urges masks as dramatic steps to combat virus roll out
Rights groups wary as NBI summons 17 for ‘fake news’
Quick chat with Nicole Andersson: ‘You really don’t need much to be happy’
Quest for COVID-19 cure: PGH needs blood samples from recovered patients
MOST READ
Angelica Panganiban on endorsing Duterte in 2016: ‘Patawarin niyo ko’
PACC to NBI: Probe Robredo for ‘competing with national govt’ in fight vs COVID-19
PACC’s COVID-19 motto? ‘Lahat ng tutulong, ikukulong’ — Lacson
5 Filipinos on Forbes Asia’s “30 Under 30” roster
Don't miss out on the latest news and information.