PNP spokeswoman is one of ’12 emerging Asian leaders’ 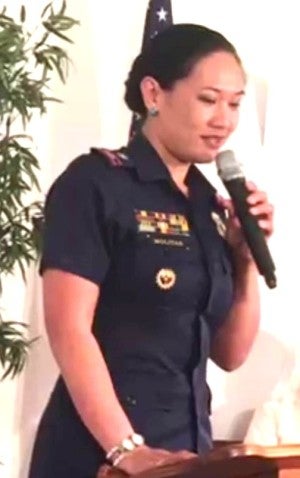 PCI Kimberly Molitas spoke at a recent roundtable discussion on the drug war In the Philippines and the rule of law with Filipino Americans and the US Pinoy for Real Change in the Philippines (USPRCP) in Fairfax, Virginia. CONTRIBUTED

SAN FRANCISCO — In the heat of the bloody Philippine government campaign against illegal drugs, the cop given the job of articulating the position of the Philippine National Police (PNP) National Capital Region Command (NCRPO) is a policewoman and a proud, full-blooded Igorot.

The credentials of the current head of NCRPO public information Chief Inspector Kimberly Molitas, a Baguio City native, are nothing to scoff at. She in the United States recently to join a leadership dialogue and exchange.

Molitas earned the prestigious spot as one of the development fellows known as the “12 emerging leaders of Asia” selected by the Asia Foundation from among 650 applicants representing 53 Asian countries. The fellows looked at peace and order problems besetting Asia and explored solutions.

Only last year, Molitas became the first Filipino policewoman to complete a Fulbright year as a Hubert Humphrey Fellow at the University of Minnesota’s Humphrey School of Public Affairs. There, she studied public policy analysis and public administration focusing on integrating the efforts of law enforcers among neighboring countries to combat transnational crimes. 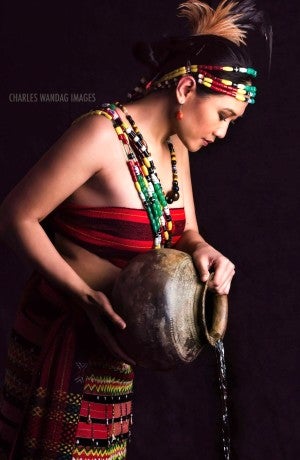 PCI Kimberly Molitas shows of her pride in her as an Igorota in this photo taken by artist Charles Badjao Wandag, a Filipino teacher, painter and musician based in Minnesota. CONTRIBUTED

She remains a resource person for the Center for Democracy and Citizenship in the US and speaks in different forums on crimes against women and children, cybercrime, human trafficking and issues besetting law enforcement.

“My family and my roots as an indigenous woman are my greatest inspirations. Coming from a country where most people think that Igorots like me are uneducated, I told myself that I should be an example or inspiration for the younger Igorots to excel,” Molitas said.

Her favorite quote is Mahatma Gandhi’s “Be the change you want to see in the world.” “Because of this, I have always advocated for career advancement programs locally and internationally. I believe that as we move to the 21st century we have to understand policing in a worldwide context. We have to learn other perspectives. This advocacy inspired me to compete on academic scholarships to be able to travel and learn abroad,” she explained.

Study she did, earning a nursing degree from Pines City Colleges, graduating from the Philippine National Police Academy (PNPA), completing the Law Enforcement & Leadership Development Program at the International Law Enforcement Academy in Bangkok and earning a master’s degree in Transnational Crime Prevention from the University of Wollongong in New South Wales, Australia. 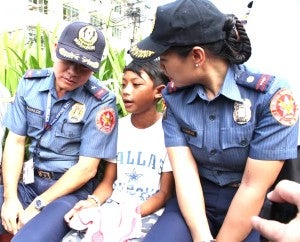 During the State of the Nation Address of President Rodrigo Duterte, Chief Inspector Kimberly Molitas (extreme right) and NCRPO Regional Director Police Chief Superintendent Oscar Albayalde (extreme left) spoke to a rallyist’s son outside the Batasang Pambansa to explain their presence in the rally. CONTRIBUTED

She also had specialized training in Advanced Surveillance & Investigations at the Australian School of Security and Investigations earning her the distinction of being the youngest of the Ten Outstanding Policewomen of the Philippines (TOPWP) at 25 years old and the Distinguished Service Medal from the Philippine Defense Secretary.

Molitas also served with the UN Police Peacekeeping Forces at the United Nation’s Stabilization in Haiti (MINUSTAH) as the first Filipina to be selected chief of audit and inspection in 2011-2012. That year she became the spokesperson of the Criminal Investigation and Detection Group (CIDG) while working concurrently with the Anti-Transnational Crime & Cybercrime Division as Project Manager of the Task Force AngelNet.

“When I was a child, I never had plans of being a police officer, but I always wanted to help people which was something ingrained in us by our parents Cesar and Paz Molitas who were originally from Kibungan, Benguet,” recalled Molitas. “We are a poor family, but we give clothes that we don’t need any more, we share food that we have with other children and help those in need the way we can.”

Being a policewoman for Molitas is not a big deal as she believes the policing world provides an equal opportunity for both male and female officers. She admits that to many, being female seems presents unique advantage in pushing for advocacies easier and faster than men.

“I am proud of our country for allowing both men and women in the military and the police unlike in other countries where I traveled to where women police are treated and seen differently. Stereotyping is always present. The PNP has proven that it is an organization where both men and women can excel on all levels,” said Molitas.

To advance the interest of women in uniform, Molitas is looking at building a network of women cops in the Philippines so they could solidify their efforts in putting forward programs that could help the government improve institutions for women. She is also an advocate for the protection of women and children and is trying to strengthen the role of policewomen in the Philippines and Asia on this issue.

Molitas runs her own scholarship programs for the education of indigenous children in the Cordillera region by providing them financial assistance monthly and supplying them school materials. She also organizes fundraisers for livelihood assistance programs and charity works providing education and health services around the Philippines.

“As a police officer, my mission is to ensure that we provide the service the public needs from the police. In the same manner we encourage public engagement in police work. I have always believed that peace and security can only be achieved if we work hand and hand,” Molitas stated.

“I believe the police organization has always been resilient to the challenges we face from the lack of many things, materially, financially, even emotionally but we always stood by our sworn duties. What we need is support on knowledge management and capability enhancement. Better police quarters, education and health benefits for our families,” she added.

As one of “12 Emerging Leaders of Asia” chosen by the Asia Foundation, Police Chief Inspector Kimberly Molitas (second from right) is seen here during a leg of their trip to South Korea, Mongolia and San Francisco, New York and Washington, DC. CONTRIBUTED

“President Duterte’s vow to rid the country of drugs and crime finally gave the PNP a rare opportunity for redemption. This is the first time that a President has told us he has our back,” Molitas sighs.

As for her short-term goals as the spokesperson of the NCRPO, Molitas looks at effectively articulating to the public the current undertakings on illegal drugs and anti-criminality programs of the NCRPO.

“In all my public appearances and interviews I have always advocated the involvement of groups in our policing activities so they can bear witness to what exactly we do in the police organizations,” intimated Molitas.

“The present war on drugs presents a big challenge to law enforcement authorities in presenting the true picture of the problems and how the enforcers are handling the situation especially on the alleged extrajudicial killings,” Molitas admitted.

She reported that the PNP has engaged the services of a commissioner on human rights commissioner and lawyers from the public attorney’s office. “We have the internal affairs service (IAS) looking at us. We have engaged in all fora to respond to questions coming from different institutions and communities. Each drug-related killing is being reviewed and scrutinized by the CHR and other investigating bodies as well, she claimed.

Molitas avers that they have long adhered to the policy of maximum tolerance and the proper use of force, which is embedded in their operational procedures and should be followed and respected by their police officers on the ground.

“Any violation means investigation and suspension from police work. The NCRPO has long advocated participative practice of policing through our barangays to local government units (LGUs) and even the media. Many of them provide us feedback that we use as reference in crafting our letter of instructions and circulars for implementation by our ground commanders to improve our services to the public,” Molitas disclosed.

As to the drive against illicit drugs, she said: “The law applies to all regardless of status, we are conducting Oplan Tokhang in both affluent, middle class, the poorest areas regardless of status in life. We have a law that criminalizes the use of illegal drugs hence our resolve to get rid of this menace that is destroying the core of our society.  We must restore the values of families to build a better country together as Filipino people.”

Molitas also advised that issues can be addressed properly by the community and the police with proper consultation, exchange and involvement to draw the police and the people closer to each other.