$19B in financial deals from Japan 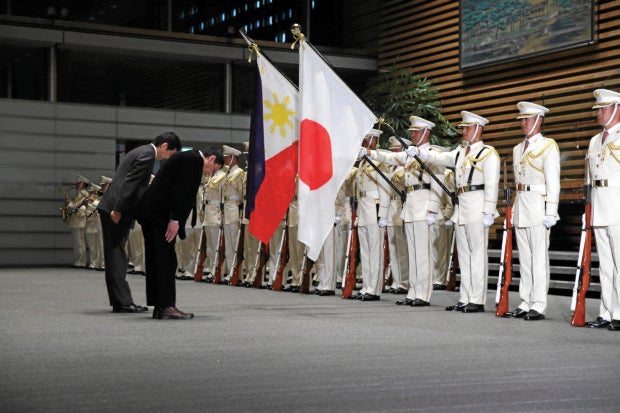 BIG DEALS President Duterte comes upwith a hefty $19 billion in proposed investments to the Philippines at the end of his official visit to Japan. He and Japanese Prime Minister Shinzo Abe inspect the honor guard before the start of their bilateral talks at Abe’s office in Tokyo. —MALACAÑANGPHOTO

The Philippines has received offers of investments and loans totaling $19 billion during President Rodrigo Duterte’s three-day official visit to Japan.

The bulk of the amount, $17.2 billion, was offered by Marubeni Corp., one of Japan’s major integrated trading and investment business conglomerates, Trade Secretary Ramon Lopez said in a text message to reporters in Manila on Thursday.

According to  a document provided by Lopez, Marubeni will be “involved in $3.2 billion worth of projects (short term) and $14 billion (medium to long term) worth of projects in mass transport systems, roads and highways, water and power.”

The loan came after Mr. Duterte and Prime Minister Shinzo Abe agreed to continue working together to maintain peace and stability in the region beset by conflicting territorial claims.

Both Japan and the Philippines are locked in a maritime dispute with China.

The two patrol ships would be in addition to the 10 Coast Guard vessels under another official development assistance loan.

The $157-million loan, signed on Wednesday by Japanese and Philippine officials, is intended to also improve the PCG’s capability for search and rescue operations, according to the Ministry of Foreign Affairs of Japan.

Also signed following Mr. Duterte and Abe’s expanded meeting were agreements to provide the Philippines with TC-90 training aircraft, high-speed boats and other equipment to enhance the country’s antiterrorism capabilities.

Another loan, amounting to $47 million, would be used to construct plants, acquire equipment, and provide operating capital to agricultural cooperatives and private businesses to help generate more jobs in the Autonomous Region in Muslim Mindanao.

Apart from Marubeni’s offer, there were $1.85 billion in committed investments to the Philippines at the end of Mr. Duterte’s three-day visit.

These covered 12 memorandums of understanding (MOUs) and letters of intent (LOIs).

Lopez said the investment deals forged in Japan, excluding the Marubeni commitment, were expected to generate some 250,000 jobs in the Philippines.

The agreements were signed after the Philippine Investment and Economic Forum on Thursday, which was attended by more than 1,000 Japanese businessmen and about 200 representatives from the Philippine business community, Lopez reported.

Japan has been a major source of official development assistance for the Philippines and Mr. Duterte conveyed his gratitude to  Abe during their meeting.

“Japan’s official development assistance (ODA) for the Philippines is second to none in terms of real value and the positive impact on the lives of the Filipinos,” the President said.

The two countries agreed to harness the ODA as a tool for “positive economic and structural changes in the Philippines.”

Back from Japan, Duterte calls visit ‘another defining moment’