No more foreign troops in PH in 2 years — Duterte 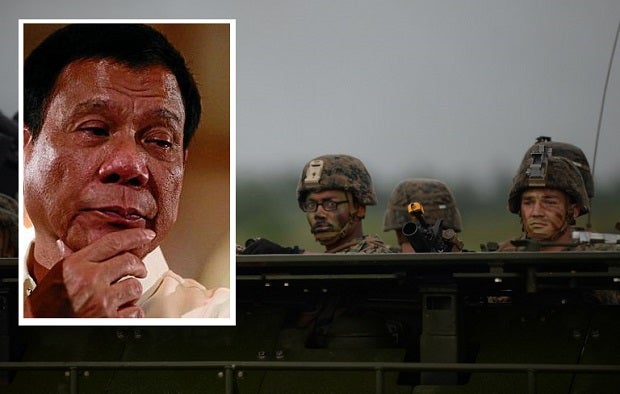 President Rodrigo Duterte (inset) told Japanese businessmen on Wednesday, Oct. 26, 2016, that he would work to get all foreign military troops out of the Philippines in two years. Photo shows US marines on their Amphibious Assualt Vehicle during a beach landing, as part of the Philippines-US amphibious landing exercise at a naval training base in San Antonio, Zambales, on October 7, 2016. AFP

TOKYO, Japan — President Duterte said the Philippines should be free of foreign troops in two years and he would abrogate executive agreements, if necessary, in order to achieve this end.

Speaking before Japanese businessmen on Wednesday, Duterte detailed his grievance against the United States for criticizing him over his war on illegal drugs and explained why he wanted to move away from it.

“I have declared I will pursue an independent foreign policy. I want, maybe in the next two years, my country [to be] free of the presence of foreign military troops,” Duterte said at the Philippine Economic Forum in Tokyo.

“I want them out and if I have to revise or abrogate agreements, executive agreements, I will,” he added, an apparent reference to the Enhanced Defense Cooperation Agreement, or EDCA, with the US.

“The Philippines can live without the US,” he said.

He said the recent war games between the Philippine and the US military would be the last.

“The Philippines can live without the US,” he said.

“We will survive without the assistance of America. There will be a lesser quality of life, but as I said, we will survive,” he said.

“If there’s one thing I would like to prove to America and to everybody is that there is such a thing as the dignity of the Filipino people,” he added. CBB