VIRAL: OFWs picking up trash in HK saluted by netizens

A group of overseas Filipino workers (OFWs) demonstrated civic-mindedness to Hong Kong residents by cleaning the hiking trails of Ma On Shan, one of the autonomous territory’s main tourist attractions.

“While exercising on Ma On Shan today, I saw seven or eight Filipino domestic helpers each carrying a big bag and filling them up with trash as they hiked. My fellow hikers, would you be glad to see people from other countries having to tidy your native land? I feel so embarrassed,” So wrote in his post, escorted by snaps of the women.

He later continued his praise with the comment, “All I did was say ‘proud of you’ to them before going on my merry way. So shameful.”

“The visors around their heads are as beautiful as angels’ halos. Sincere thanks,” said another netizen. Meanwhile, a vast number of Facebook users recognized the Filipina hikers along MacLehose Trail. The role models behind the environmental cleanup drives include Filipino and Indonesian domestic helpers. Later, they were joined by Hong Kong-based American professor Robert Hayes. Together with Hayes, the all-female battalion divided themselves into six teams, each assigned to different areas in MacLehose Trail to pick up clutter and plastics. In an interview via e-mail, hiker Renalda Castillo, who uses the Facebook name Rena Marimar, shared her uplifting experience with fellow hikers. Her team, “Survivor 2016,” began operations last March and since then, a multitude of Hong Kongers and foreign hikers have lauded their strenuous efforts to sanitize the trail.

“Sobrang nakakataba ng puso [yung] mga papuri nila. Sa simpleng pagpulot namin ng basura lahat ng makasabay at makasalubong namin [na] ibang lahi puro ‘thank you’ at ‘good job’ [ang] sinasabi sa amin,” she said, noting that her employer, a friend of So, and her family in the Philippines are proud of her.

(All their praises are heartwarming. In our simple efforts to pick up trash, all the foreign hikers would say “thank you” and “good job”.) 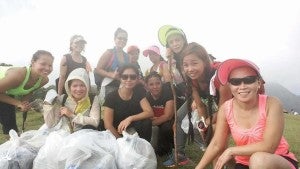 Castillo, 37, an OFW for two years, manages to balance her hectic schedule taking care of her employer’s family, takingtaekwondo classes with them and joining the hiking activities held every Sunday and holidays.

Castillo concluded with a gentle reminder to Hong Kongers in maintaining their pristine natural parks and mountains: “Sana naging maganda at mabuti kaming halimbawa sa mga taga-Hong Kong at panatalihin natin malinis ‘di lang ang kabundukan pati na din sa city. Disiplina sa sarili [ang kailangan] upang mahalin at protektahan ang kalikasan,” she said. (I hope that we will serve as a good example to Hong Kong natives. We should maintain cleanliness not only in the city but also in the mountains. Self-discipline is necessary in order to treasure and protect nature.)

To inquire about their initiatives, check the hikers’ website here.  Gianna Francesca Catolico

Read Next
Duterte unlikely to change stance on S. China Sea issues—analysts
EDITORS' PICK
Eleazar: PNP open to ICC probe but PH judicial process is working
P258M shabu seized, Chinese national arrested in Manila drug bust
Gilas out to prove Korea win not a fluke; Tab fires back at ‘lucky shot’ remark
SANTIS Delicatessen: The road to survival is sweet and savory
Man wounded as raid on illegal cockfight in Isabela leads to shootout
Piolo Pascual: The Ultimate Heartthrob continues to level up
MOST READ
Palace: Face shields no longer needed to be worn outdoors
LOOK: ‘Low vaccination’ turnout in 4 Manila sites after no walk-in policy
Lacson or Pacquiao a possible presidential candidate for NPC – Sotto
‘Pinadudumi ang politika:’ Sotto wants FB to shut down ‘troll farms’ until after 2022 polls
Don't miss out on the latest news and information.