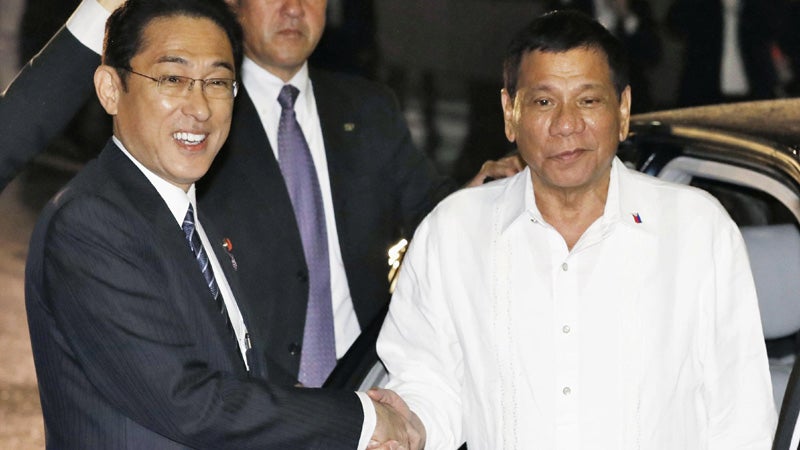 Philippine President Rodrigo Duterte, right, is greeted by Japanese Foreign Minister Fumio Kishida upon his arrival at a Japanese restaurant for dinner in Tokyo Tuesday, Oct. 25, 2016. Duterte arrived in Japan earlier in the day for a three-day visit, his first since becoming Philippine leader at the end of June. (Kazushige Fujikake/Kyodo News via AP)

TOKYO—President Duterte was all praises for Japan for all the assistance it was providing the Philippines, but could not contain his anger and once more lashed out at the United States and the European Union for their criticism of his antidrug war.

In a profanity-laced speech before 1,200 members of the Filipino community in Japan, Mr. Duterte called the United States a bully and said he was not fazed even if critics would file cases against him.

He is immune from suit as President, but he could be charged once he’s out of office.

The President said threats to cut aid to the Philippines was a “demeaning” statement, making it appear as if he was a dog being taunted with a treat.

“You have the evidence, go ahead and file the case. I have no problem with it. I can rot in prison for my country. I am not a Filipino for nothing,” he said.

Even if the Philippines is poor, it must be respected, he said.

“Do not fuck with our dignity,” he said.

He could accept such treatment and criticism as Davao City mayor, but not as President when he already carries the burden of sovereignty, he said.

On comments that he’s acting like a hoodlum, not a statesman, he said this was right. “You’re a fool. You only found out now?” he added.

In contrast, Mr. Duterte had nothing but good words to say about Japan, where he said he was “more comfortable.”