Arroyo may be PH-US bridge if Clinton wins—analyst 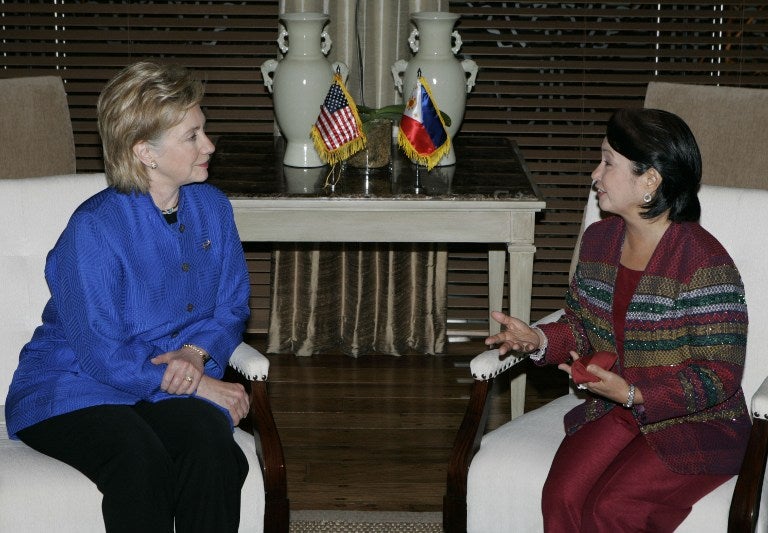 Amid President Rodrigo Duterte’s announced “separation” from the United States, former President and now Pampanga Representative Gloria Macapagal-Arroyo may serve as bridge between the Philippines and the Western superpower should US Democratic candidate Hillary Clinton win the November presidential election, according to a political analyst.

Prof. Mon Casiple said Arroyo may play a bigger and crucial role in the diplomatic relations between the two nations because of her personal ties with the Clintons.

“[Arroyo’s relations with the Clintons] could help [and] it is good kasi ang susi naman sa mga relasyon ay ‘yung may confidence. May trust and confidence ‘yung mga policymakers from both sides kaya nga nagkakaroon ng state visit… Palaging trust ‘yan,” Casiple was quoted as saying in a statement from Arroyo’s camp.

(It is good because the key to relations is confidence. The policymakers from both sides have trust and confidence, that’s why there are state visits… it’s always about trust.)

Arroyo was a classmate of Clinton’s husband and former US President Bill at Georgetown University in the 1960s. Arroyo’s camp said Bill Clinton would also invite the now House deputy speaker to talk at his Clinton Global Initiative meetings even after stepping down as president in 2001.

Arroyo also bestowed upon Clinton, the Secretary of State, the Sikatuna award during an official visit in November 2009.

Casiple said Arroyo “should make communication easier” between the Philippines and its longtime ally amid the “complexities of foreign affairs.”

“May pwedeng bridge sa communication. ‘Yun ang isang maganda diyan, the message will be clear on both sides,” he said.

(There could be a bridge for communication. That’s what’s good about it, the message will be clear on both sides.)

In his state visit in China, Duterte announced his “separation” with the United States “both in the military and economics.” But the President later clarified that his remark did not mean severance of diplomatic ties with the United States as “it is to the best interest of the country that we maintain that relationship.” JE/rga

Read Next
Filipino among 26 hostages freed by Somali pirates
EDITORS' PICK
Anti-terror bill approved with no changes in ‘unconstitutional provisions’
SMDC The Good Guys on the Go
Cherry Mobile teams up with Cloud Panda PH, launches online store
DOH hit over delayed health workers’ benefits
PhilHealth cuts cost of COVID-19 test
COOCAA TV Bounce Back Sale offers up to 50% off
MOST READ
It’s final: Anti-Terror Bill now only needs Duterte’s signature
Piolo gets first call slip from ABS-CBN to resume ‘ASAP’ taping
‘She had no right to be in Singapore’: Youth pleads guilty to abusing Filipino maid
DOH hit over delayed health workers’ benefits
Don't miss out on the latest news and information.