No foreign aid yet for victims of Supertyphoon ‘Lawin’ 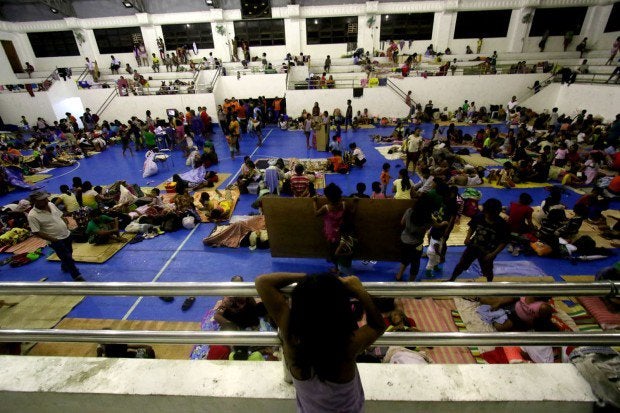 More than 700 residents living on the shoreline take refuge on Alcala Gymnasium after pre emptive evacuation due to Supertyphoon Lawin in Alcala town, Cagayan. INQUIRER PHOTO / RICHARD A. REYES

TUGUEGARAO CITY—Three days after supertyphoon “Lawin” struck Cagayan province, local officials and residents were left wondering why they haven’t received foreign government assistance as they struggled to cope with the devastation left by one of the strongest storms to smash into the country.

The aftermath of Lawin’s fury in Cagayan and other northern Luzon provinces this week was compared to that left by “Yolanda,” which flattened Eastern Visayas in November 2013 and drew world attention and massive foreign aid and numerous aid workers. In contrast, residents here on Saturday noticed the absence of foreigners then cope with Lawin’s destruction.

That may be because the national government hasn’t appealed for foreign assistance, according to Romina Marasigan, spokesperson for the National Disaster Risk Reduction and Management Council.

Marasigan said on Friday that the government had not requested help from foreign governments. However, the Asean Coordinating Center for Humanitarian Assistance and the Manila offices of the World Health Organization and United Nations Children’s Fund were on standby and ready to provide assistance once requested, she said.

The United Nations Population Fund has pledged “dignity and maternity tents” for pregnant and lactating mothers. Also on standy to help upon request are the Philippine Disaster Relief Foundation, Doctors Without Borders and World Vision with relief supplies and aid workers, Marasigan said.

While local governments struggled to distribute food and restore electricity and communication services here, the national news was about President Duterte’s “separation” from the United States, which he announced during his state visit to China.

Cagayan Gov. Manuel Mamba said the province would welcome any help from foreign governments, whether from the United States or China.

Donations such as blankets and bottled water that were flown to Cagayan came from private foreign groups.

Capt. Evelyn Audencial, spokesperson for the Army’s 5th Infantry Division based in Gamu town in Isabela province, said the military had not received word of any assistance from foreign governments.

“As of now there is none, but we also believe we can manage. Our troops have been working round-the-clock to be able to help our typhoon survivors,” she said.

Relief operations faltered as local governments awaited a decision by the Cagayan provincial board to place the province under a state of calamity to speed up the release of emergency funds.

Vice Gov. Melvin Vargas III said he and the Cagayan board were waiting for a request from the governor so they could convene and declare a state of calamity.

Provincial and municipal DRRM offices have been coping with limited quantities of food and other relief supplies.

On Saturday, local DRRM personnel and support crews were deployed to various barangays to distribute relief goods, which were delivered on Friday by two C-130 planes from Mactan.

Residents in Tuguegarao, Peñablanca and Solana towns, told the Inquirer they have not received a single pack of relief goods.

“Some people [from municipal government] came and took photos of my house, and left. They did not say anything about what kind of help they were giving,” said Erlinda Orteza, 60. The roof of her house in Barangay Maddarulug in Solana was blown away. TVJ

Read Next
Filipinos must let go of ‘little brown brother’ image—Yasay
EDITORS' PICK
IATF: Food firms to operate with 50% of workforce during Luzon quarantine
BREAKING: 1,075 people in PH has coronavirus disease – DOH
Style and music journeys with Claudia Barretto
UP-PGH wards for COVID-19 patients finished in 5 days
Cebu City closes its borders
DILG to stranded workers: ‘Stay where you are’ until Luzon-wide quarantine is over
MOST READ
No more bread? Company forced to limit production
Koko Pimentel: Protocols may have changed over time
Another doctor dies due to COVID-19 in Cebu City, doctor-husband critical
Pacquiao to seek probe on leaked private letter from Barangay Dasmariñas
Don't miss out on the latest news and information.