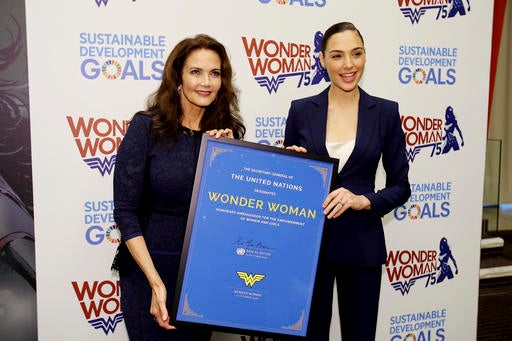 In this image released by Starpix, actress Lynda Carter, who starred in the 1970s series,”Wonder Woman,” left, and actress Gal Gadot, who stars in the upcoming film, “Wonder Woman,” appear at a United Nations event naming the super hero character as an Honorary Ambassador For the Empowerment of Women and girls, Friday, Oct. 21, 2016, at the United Nations. AP

Though a founding member of the Justice League, Wonder Woman is receiving pushback inside the United Nations.

More than 600 UN staff members have signed an online petition calling on Secretary General Ban Ki-moon, a professed feminist, to reconsider the appointment of the fictitious superhero as its ambassador for women’s empowerment.

The petition says “a large-breasted white woman of impossible proportions, scantily clad in a shimmery, thigh-baring body suit with an American flag motif and knee-high boots” is not an appropriate spokesperson for gender equity at the UN.

Privately, several UN officials have expressed concern about the choice of a comic-book character. Publicly, its leaders have described the decision as a creative way to reach younger audiences, in advance of a new Hollywood film starring Gal Gadot as Wonder Woman.

The heroine’s appointment ceremony was to be made on Friday (Saturday in Manila).

Women’s advocates said the selection of Wonder Woman was particularly ill timed because the UN has rejected seven female candidates for secretary general. The next leader will be António Guterres of Portugal.

Raimonda Murmokaite, the permanent representative of Lithuania, reacted by asking on Twitter why “real life women” could not be selected.

Anne Marie Goetz, an academic and a former adviser to the UN who had campaigned for a woman to be secretary general, called the choice “disgusting” and wrote on Twitter that Wonder Woman should use her “lasso of truth” to expose the UN’s “hypocrisy.”

Stéphane Dujarric, a UN spokesperson, said on Thursday that UN leaders had listened to the concerns of UN staff members and even changed the public campaign around Wonder Woman to reflect those concerns and “bring a celebration of real-life women and girls making a difference every day into the core messaging.”

“We work and engage with amazing women around the world every day and have many strong, real-life women who advocate on behalf of the UN for rights of women,” he said.

Diane Nelson, president of DC Entertainment, was expected to go to the UN to accept the designation, along with “surprise guests.” —NEW YORK TIMES NEWS SERVICE