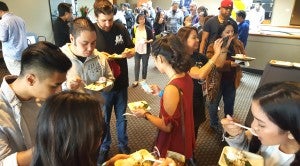 OAKLAND, California — Two years after its launch, the much-awaited premiere Filipino food festival featuring mostly endless fusions of traditional food with ingredients from different countries was met with much enthusiasm by foodies, Filipinos and non-Filipinos alike.

The many changes, however, initially made even PJ Quesada, chairman of the Filipino Food Movement (FFM) and members of the organizing committee queasy. 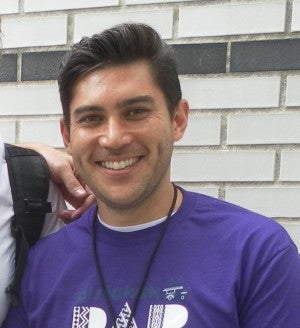 “Every time we do an event like this, we had doubts that people will come,” confessed Quesada, prime mover of movement.

“Now we found our doubts were unfounded. The chefs are shining they’ve all found their flow and everybody’s smiling. I guess similar to our 2014 event, the turnout is greater than we expected. I attribute this to a combination of team of dedicated volunteers, amazing chefs and a beautiful venue,” Quesada said with relief.

FFM Vice-President Joanne Boston chimed in that it was always a challenge to get people to a paid event whether it is Filipino or not especially, since the 2014 event was free. It reportedly attracted 30,000 people at the Justin Herman Plaza in San Francisco.

“This time we wanted it to be a little bit more controlled and the food better. We saw that quality kind of diminished with quantity, but you’ll see in their plates right now, they’re beautiful. It’s because each chef is given time to prepare the dishes,” explained Boston. 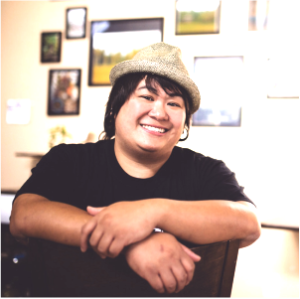 Charleen Caabay, Jersey-born owner of Kainbigan in Oakland, which offered pancit lomi soup from Batangas for the day menu of Savor Filipino. CONTRIBUTED

“This time it is a closed event well suited to what we want to accomplish because there is control. And the people that we are attracting are the kind of people we are trying to help spread the word on Filipino food. They appreciate the food, they appreciate the chefs that are making the food, and they willing to share it with everybody,” Boston added.

Quesada concluded that the turnout was proved that foodies were willing to invest in Filipino food’s advancement.

“We learned a lot of lessons in the 2014 event. We design the experience first and foremost around the food, second around the guests, but we are also very sensitive to the chefs who are the ones doing the actual work,” Quesada stressed.

Quesada also revealed that their focus this year was shining a light on those who are “pushing the bounds” to unlock the potential of Filipino cuisine. 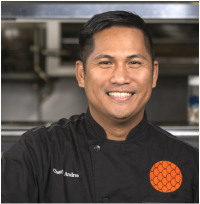 Savor Filipino Art Director and board member Al Perez added, “It is incredible what these Filipino chefs are doing. They helped make Filipino cuisine a lot more palatable and accessible to a bigger group of people and I think that is what we need to do moving forward. It has made non-Filipino discover Filipino cuisine,” Perez mused.

The much–improved presentation of Filipino food did not escape the attention of Carolina Chandler, a Filipina chef and food styling educator born and raised in the Philippines, who has been in the culinary industry for the past 25 years.

“I have always believed that preparations of Filipino foods should be upgraded and I commend Savor Filipino for its excellent food preparations. This is a great event where talents of different Filipino chefs are showcased. I am so proud of all these food presentation and technique that they did,” Chandler declared. 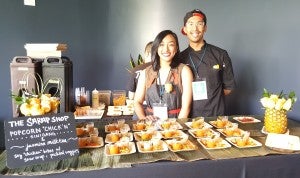 “One reason that I am very excited with this event is that I believe that we are actually making history with our culture because what we are seeing now is the evolution of Filipino food in progress. It is a living art. Culinary art is a living art. It moves, it grows, it progresses,” Araullo stated.

Most of the chefs are Filipinos born in the United States but are nevertheless passionate in their craft as culinary artists that were influenced greatly by their Filipino parents.

Charleen Caabay, Jersey-born owner of Kainbigan in Oakland that offered pancit lomi soup from Batangas, did not have any formal lessons on Filipino cooking. She was just influenced by family members who love to cook. 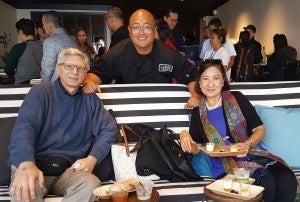 Alex Retodo (center), the lumpia chef of Oakland who is now known for his bacon cheeseburger lumpia, longs for the day when lumpia would be offered by vendors in the baseball or football stands; Filipina chef and food styling educator Carolina Chandler (extreme right) is glad that the presentation of Filipino food is now on a higher level. JUN NUCUM

Kristen Brillantes of Sarap Shop in San Francisco, who prepared vegan popcorn “chick’n sinigang,” atchara and jasmine milk tea, was born in the U.S. but spent her summers and Christmases in her parents’ provinces of Masbate and Quezon. “Cooking was the best way to spend quality bonding time with my mom Gloria,” she recalled.

Half-Visayan and half-Ilocano Alex Retodo, the lumpia chef of Oakland who is now known for his bacon cheeseburger lumpia, has his mother Amelia for an inspiration. He dreams of making lumpia the official Filipino appetizer as other communities have tacos, empanadas, pizza and burritos. As a big sports fan, he also wants people watching the games to hear a vendor in the stands yelling, ‘Lumpia lumpia bacon cheeseburger lumpia!’”

Charles Andres of Ocean Pacific Grill Fusion in San Diego, California, was born in Marcos, Ilocos Norte but his family immigrated to Hawaii where their parents kept speaking with them in Ilocano and Tagalog. It was their way of keeping the Filipino heritage alive, aside from always having Filipino food in their meals. 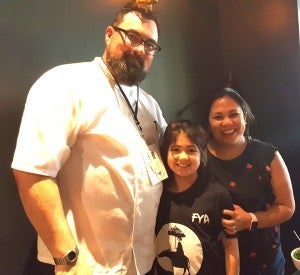 When the Andreses opened Ocean Pacific Grill, they wanted to introduce Filipino cuisine on a different level so that both fellow Filipinos and non-Filipinos would know that Filipino food was not just the turo-turo or the home-cooked type.

Chef Garrett Doherty, the non-Filipino cited by Al Perez, is from Seattle and who has been married to Filipina wife Kate for 17 years. He learned Filipino recipes from her. Doherty introduced pork belly adobo congee, a staple at their Kraken Congee in Seattle, which serves 50 percent Filipino food, including kare kare, sisig, pinakbet fried rice and more.

Long lines and smiles inside the venue as guests patiently waited to have a taste of the Filipino food. JUN NUCUM

Doherty likes Filipino food because it is bold in flavor and presentation. He claims that every Filipino dish is a party dish. “They may be simple but they are bold and loud. They’re my version of the food as I see them. It may not be traditional in anyway but will still remind you of home,” he said.