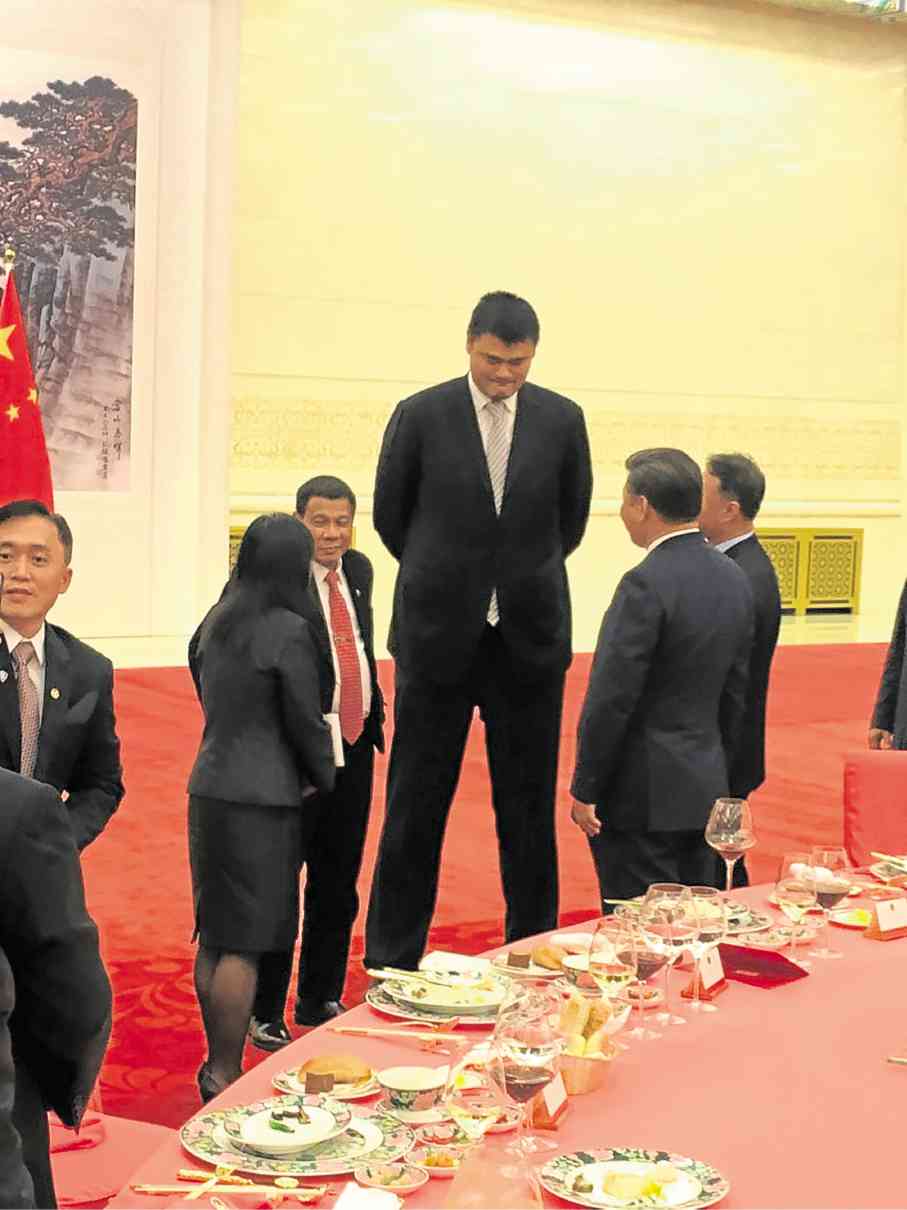 COURTING A GIANT President Duterte and Chinese President Xi Jinping (second from right) share a light moment with retired basketball superstar Yao Ming at the state banquet held at the Golden Hall of the Great Hall of the People in Beijing on Thursday night . CONTRIBUTED PHOTO

President Rodrigo Duterte’s declaration of “separation” from the United States is “unwise” and a “national tragedy” that should not happen, former Foreign Secretary Albert del Rosario said on Friday.

READ: Split with US unwise, tragedy that shouldn’t happen–ex-DFA chief

Mr. Duterte’s shock declaration, made during a state visit to China on Thursday, has thrown Philippine foreign policy into confusion, with the Americans saying they are baffled and some Filipino lawmakers warning him his decision could backfire on the Philippines.

The firebrand Mr. Duterte rarely lets a day pass without taunting or abusing the United States, but his latest comments signal he wants to torpedo a 70-year alliance with the United States in favor of China and Russia.

“In this venue, your honors, I announce my separation from the United States, both in military, not maybe social, [and] economics,” Mr. Duterte told Chinese and Filipino businessmen, to applause, at a forum in the Great Hall of the People in Beijing.

“I’ve realigned myself in your ideological flow and maybe I will also go to Russia to talk to (President Vladimir) Putin and tell him that there are three of us against the world—China, Philippines and Russia. It’s the only way,” he said.

Mr. Duterte’s efforts to engage China, months after a UN-backed tribunal in The Hague ruled that Beijing did not have historic rights to the South China Sea in a case brought by the previous administration, mark a reversal in foreign policy since the 71-year-old former mayor of Davao City took office on June 30.

“What is unfolding before us must be considered a national tragedy [that] does not need to happen.  It is our earnest hope that this most unfortunate declaration will be corrected,’’ Del Rosario said in his strongest statement yet on Mr. Duterte’s cozying up to China.

“The declared shift in foreign policy casting aside a longtime reliable ally to hastily embrace an aggressive neighbor that vehemently rejects international law is both unwise and incomprehensible,’’ Del Rosario said.

“We must be with responsible nations with whom we share our core values of democracy, respect for human rights and the rule of law. To stand otherwise is not what Filipinos are. It is not what we do. It is not what is right,’’ he added.

Team leader at The Hague

Del Rosario was the foreign secretary from 2011 to 2016 in the administration of President Benigno Aquino III. He served as Philippine ambassador to the United States from 2001 to 2006.

He led the Philippine team that argued the Philippines’ challenge to China’s claim to 90 percent of the South China Sea before the Permanent Court of Arbitration in The Hague last year.

On July 12, the tribunal ruled that China’s claims in the South China Sea has no basis in international law and that it has violated the Philippines’ sovereign rights to fish and explore for resources in waters within its 370-kilometer exclusive economic zone in the strategic waterway.

China, which refused to take part in the proceedings, rejected the ruling, calling it “waste paper.”

Mr. Duterte, who styles himself as a socialist, has previously said he will maintain the Philippines’ security alliance with the United States, but, saying he is charting an “independent foreign policy,” he has disallowed joint patrols with the US Navy in the South China Sea and canceled annual joint military exercises with US forces.

Whether Mr. Duterte knows that the joint patrols and military maneuvers are part of the security alliance is unclear, and even his special envoy to China, former President Fidel Ramos, has described the President’s comments as “discombobulating.”

In a recent speech, Del Rosario noted the “lack of clarity’’ from the Duterte administration about the President’s wanting an “independent foreign policy.’’

“There is nothing permanent in all of this,” Enrile said in a news forum in Quezon City on Friday. “As long as he does not abrogate [our security treaties], we are still tied with the United States.

Enrile, however, warned the country’s leaders to tread carefully in dealing with countries like China.

Enrile, a former defense secretary, said forging a military alliance with China would have ramifications in other nations, like Japan, which is at odds with China.

He said severing ties with the United States would also have a “reverberatory impact” in international institutions, such as the World Bank, International Monetary Fund and World Trade Organization.

“When you look for friends, you just don’t look for rich people who can give you loans or have lots of toy guns to lend. You also look at how they will treat you as a person and if they are ready to defend you. They might play with you, but there is no assurance that they’ll respect you as a person,” De Lima said.

“Foreign policy rebalancing should not mean that we swing the pendulum to the other extreme, that we dump old friends for new suitors,” Recto said in a statement.

“We should practice big-tent diplomacy, welcoming all, and shunning no one. The national interest is served by extending amity to all, and hostility to none,” he said.

‘He does not mean it’

“He does not mean it,” Lagman said.

READ: Lagman on Duterte’s break-up from US: Just hyperbole

He said the Philippines could not afford to completely end its relations with traditional economic and security allies like the United States.

“He is just catering to the goodwill of his Chinese hosts,” Lagman said.

“Many Filipinos get their livelihood from America—from remittances of Filipino-Americans, emolument from US investments in [business process outsourcing], manufacturing and the service sector, and the billions [of dollars in] US grants and loans,” he said. —WITH REPORTS FROM JEANNETTE I. ANDRADE, DJ YAP, JHESSET O. ENANO, AFP/TVJ