Pied Piper of the Philippines

Like many of the three million Filipinos in the United States and millions others scattered around the world, I wake up in the morning wondering what is happening to the Philippines. Since Rodrigo Duterte assumed the presidency three months ago, the nation has gone through so many transmogrifications that the Pearl of the Orient Seas is hardly recognizable.

One reads about a populist strongman who rants and raves, vowing to radically purify a country hopelessly overridden with drugs and criminals. Duterte curses anyone standing in his way – whether Barack Obama, UN’s Ban Ki-moon or the European Union. He flicks a middle finger at the world community, and his 16 million supporters cheer.

One clicks on another website and learns that 3,000 people suspected of links to the drug menace have been slaughtered by police, vigilantes, or unknown assailants. Human rights groups are horrified. But, many claim they now can wander through the streets of Manila safely. Not bothered by the continuing bloodbath, they sleep peacefully at night.

Duterte severs a 65-year strategic alliance with the United States, ordering Yankees to go home and runs to Beijing, the same bullying country that is poised to take over the West Philippine Sea. Never mind that China is the pipeline of the narcotrade plaguing the country. But people give Duterte a pass because the visionary president is implementing a nationwide 911 hotline, modernizing transportation, subsidizing farmers, increasing the salaries of police and military, etc. The president is a brilliant tactician, they say, as he implements socio-economic programs to alleviate poverty and dismantles decades of entrenched graft and corruption.

One goes through social media and wades through much garbage, looking for the gem of truth. But, perhaps that is to be expected. The first casualty of war, after all, is the truth. The words of California Senator Hiram Warren Johnson uttered in 1918 couldn’t be truer today.

Duterte’s unrelenting war on drugs – a program he proudly compared to Hitler’s Holocaust – has killed thousands of Filipinos. It has also killed the truth. A culture of death and a network of deception today enshroud the Philippine landscape.

The Presidents says there are three million drug users. The Dangerous Drugs Board pegs the number closer to 1.7 million. He says these drug users are scumbags and therefore subhuman. They have no human rights. They do not deserve due process.

Duterte’s condescending view of human dignity is far removed from that of St. John Paul II. In Evangelium Vitae (1995), the late Pontiff wrote: 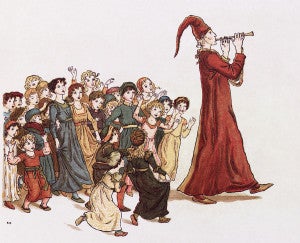 The Pied Piper of Hamelin. WIKIPEDIA

“Man is called to a fullness of life which far exceeds the dimensions of his earthly existence, because it consists in sharing the very life of God. The loftiness of this supernatural vocation reveals the greatness and the inestimable value of human life even in its temporal phase.” The saint wrote further: “In a special way, believers in Christ must defend and promote this right, aware as they are of the wonderful truth recalled by the Second Vatican Council: “By his incarnation the Son of God has united himself in some fashion with every human being.” This saving event reveals to humanity not only the boundless love of God who “so loved the world that he gave his only Son” (Jn 3:16), but also the incomparable value of every human person.”

Murder, i.e., the extrajudicial killings brought about by Duterte’s drug war, is wrong.  As St. John Paul said: “Like the first fratricide, every murder is a violation of the ‘spiritual’ kinship uniting mankind in one great family, in which all share the same fundamental good: equal personal dignity.”

People say that only experts in their fields should criticize the president. That if one is not a geopolitical expert, he or she should not comment on Duterte’s wild international strategies. That unless one is a psychiatrist, he or she should not comment on Duterte’s unstable mental condition. Perhaps, there is some validity to that charge. But setting other issues aside for the sake of achieving clarity, it does not take an academic degree or expertise in ethics or moral theology to recognize right from wrong, justice from injustice, compassion from cruelty. God, in his kindness, has inscribed the natural law in every individual heart and soul. Anyone should be able to recognize that the administration’s strategy of killing of thousands of its citizens is wrong.

To defend the unjustifiable, Duterte has spinned the narrative and blamed the international community for interfering in Philippine affairs. He resorts to nationalistic hot buttons, which many find assuring. Yes, the Filipino needs to keep his head up high. We cannot be the door mat of foreign powers. Who can argue with that?

Patriotism is as delightful as warm puto and hot sikwate in the morning, after all.  But whipping nationalistic frenzy in order to cover crimes against humanity is a different animal. It is called smoke-screening, not patriotism.

This national frenzy brings to mind the story of the Pied Piper of Hamelin. The eccentric character did get rid of the rats that had infested the town. But there was a steep price to pay. The town’s 130 children joyfully followed the Pied Piper into a cave never to be seen again.

Filipinos who support Duterte are cheering now that so-called rats are being run out of town. Soon, like the townsfolk of Hamelin in 1284, they will realize the cost of such a campaign – the loss of basic human rights, freedom of speech, habeas corpus, etc.

The question now is this: Are we prepared to face another episode of martial law?