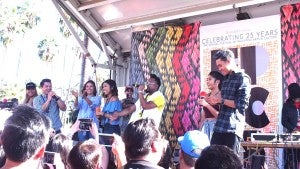 LOS ANGELES — Despite temperatures approaching 90 degrees, the prospect of a free Filipino American festival featuring culinary delights, celebrities and exciting entertainment proved too important to miss for thousands who thronged to this year’s Festival of Philippine Arts and Culture (FPAC) Oct. 8 at the renovated Echo Park Lake on the edge of LA’s Historic Filipinotown.

College students, professionals, manongs and families from all over Southern California came to celebrate the 25th anniversary of one of the major community events for Filipino American history month. This year’s bash was called “Samu’t Sari: Showcasing the Diverse Creative Tapestry of the Fil-Am Community.”

Produced annually by Fil-Am Arts, a longstanding community non-profit, FPAC has moved over the years from its original Los Angeles City College site to San Pedro’s Cabrillo Beach and Pt. Fermin Parks and 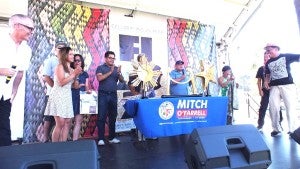 Giselle Tongi, TV Host of “Kababayan Today,” served as the main stage producer and master of ceremonies. She introduced headliner, Apl.De.Ap, from the Black Eyed Peas, and was joined onstage by Winston Emano and Leslie-Ann Huff from the TV series, “Vampire Diaries.”

Also taking to the stage were Broadway performer Jon Jon Briones from multiple “Miss Saigon” productions and other Miss Saigon stars performing together as “Mama Bares.” Dance company Kayamanan ng Lahi held a procession through the audience leading to their stage performance. 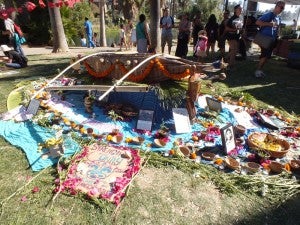 On hand to accept the Excellence in Arts award for TV’s “Crazy Ex-Girlfriend” series were Executive Producer Sarah Caplan and actors Vincent Rodriquez III and Tess Paras. Also receiving an Excellence in Arts award was the very talented Basco family, comprised of Derrick, Darion, Dion, Ariana and Dante (especially known for their roles in the Fil-Am classic “The Debut”). 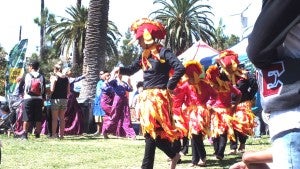 Dance company Kayamanan ng Lahi opens its set with a procession through the audience leading to their stage performance. FLORANTE IBANEZ

Jazz singer Charmaine Clamor was sighted in the crowd. ”We need to support this, it’s one a kind here in Los Angeles and I am here to also support our friends, they have this balangay ng lahi, we were invited to have an offering to our ancestors. I put an offering there for our relatives and also for the victims of President Duterte’s anti-drug campaign. I’m here to honor our kababayans to support my sister, Lyn Pacifica, and her Herbalaria business. It’s always so fun here.”

Pacifica sells handmade indigenous healing oils and scrubs. “My Ulo oils are made from malunggay and guava leaves all natural. It takes me two weeks to make a batch of 13 bottles. You can follow us on Instagram, “Herbalaria,” we are running a special now.

A festival highlight was the unveiling of Filipino-themed street lighting design for Historic Filipinotown presented by Councilmember Mitch O’Farrell and Commissioner Joel Jacinto. Design contest winner Roel Punzalan said, “My design proposal aims to incorporate the inclusive experience and nature of Filipino culture and the ethnic diversity of Historic Filipinotown.”

Progressive rapper Bambu, the much-anticipated annual Tinikling Battle among local colleges and a Poetry Slam contest wrapped up the festival day next to the scenic Echo Park Lake. For more info of past and future FPAC’s visit www.FilAmArts.org.