Calif. infant care now costs as much as Univ. of Calif. tuition 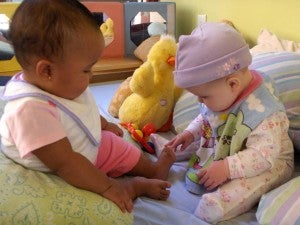 PALO ALTO, California — Parents in California are hit hard in the wallet not only when their kids head out to college, but also in the first two years of their children’s lives.

According to the latest data on Kidsdata, the state’s parents spent an average of $13,327 per year to send their infants to a child care center in 2014, the same year that University of California tuition and fees hit $13,222.

Nationally, childcare for children below age five has also exceeded that of in-state college tuition.

When broken down by county, San Francisco Bay Area counties had the highest costs of infant care, with Marin County leading the pack at more than $18,000 per year, while more rural counties in far northern California and the Central Valley had the lowest costs for infant child care, at less than $12,000 per year.

Despite the high costs of childcare relative to income, nationally, the median hourly wage for childcare workers is $9.77, and nearly half of this work force receives government assistance in the form of food stamps, welfare benefits, or Medicaid.

Early childhood is a critical period for cognitive, biological and social development. The quality of children’s environments and experiences during these years can have lasting effects .

From infancy, children are learning to relate to others and their environment while developing the skills to successfully navigate social, emotional, and educational challenges. Children who attend high-quality preschools tend to have better test scores, fewer behavioral problems and higher rates of high school graduation, among other long-term benefits.

Policies that could improve child care include improving the state’s professional development infrastructure to prepare and support an effective early care workforce, making the Child and Dependent Care Tax Credit fully refundable at the state level and encouraging other federal solutions to address the high cost of child care.