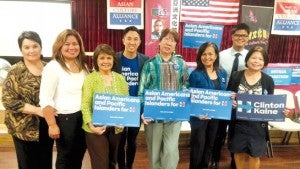 LOS ANGELES — Filipino American supporters of Hillary Clinton in Nevada came together on the eve of Filipino American History Month to raise support for the Democratic presidential nominee in one of the most contentious battleground states.

During the last week of September, the Asian American and Pacific Islander (AAPI) outreach team from Hillary for America launched “Our AAPI Voices; Our Voice, Our Vote”, a weeklong effort to garner support for their candidate while denouncing her opponent, Republican nominee Donald Trump.

The group stressed that the Republican presidential nominee does not have interests of Fil-Ams in mind. They focused on his immigration plans like his proposed immigration ban from certain countries including the Philippines and a plan to end birthright citizenship.

“While Trump wants to keep hardworking Filipino immigrants out of our country, Hillary Clinton wants to reduce the backlog for family reunification green cards,” he added.

“When AAPI businesses are strong, the AAPI community is strong. Hillary Clinton has a plan to strengthen small businesses by cutting red tape and increasing access to capital, while Donald Trump simply has a track record of stiffing contractors who did work for him,” said Filipino community leader Kate Torres-Recto.

“Our businesses would suffer if Donald Trump becomes our next President as some analysts have predicted that Trump’s plans would cost 3.5 million jobs. We need a ‘you’re hired’ president, not a ‘you’re fired’ president,” she added.

Nevada touts a large Filipino community with a majority located in the Las Vegas area. As stated in a previous Asian Journal report, U.S. Census Bureau data shows that “Filipinos comprise more than half of the Asian American population, with an estimated total of 100,000 Filipinos.”

“It’s Filipino American History Month, so let’s honor their many contributions — from serving in WWII to strengthening our labor movement,” Clinton tweeted on Monday, Oct. 3.

More Filipino Americans support Clinton over her opponent, mainly due to her stances on major issues like immigration, health care and education. A study conducted by APIAVote, Asian Americans Advancing Justice and AAPI Data showed that 59 percent of Fil-Am voters prefer Clinton, beating Trump who only garnered a 23 percent favorability rating.