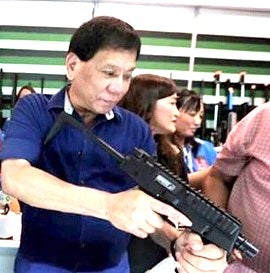 President Duterte’s mouth set a world record for traveling the longest distance in the shortest time. In a span of just six days, it traveled from doubting God in Heaven to condemning Obama to Hell and they were not even the worst remarks uttered in that week.

Speaking before journalists in Malacanang Palace on Sept. 27, 2016, Duterte justified the restoration of the death penalty as necessary to “make up for divine inconsistency.” (“Duterte: I can teach God about justice”). In his speech, Duterte criticized the “bleeding hearts” in the Catholic Church for their opposition to the death penalty because of their belief that “only God can kill.” Duterte said he did not want to have to wait until Judgment Day. “What if there is no God?” he asked.

Six days later, in an Oct. 3 speech to local officials, Duterte complained that the United States was refusing to sell weapons to his government and, therefore, President Obama “can go to hell.” He had been angered by Washington’s criticism of his take-no-prisoners crusade against drug addicts and he threatened to turn to China and Russia for weapons purchases.

Duterte may not realize that the funds used by the Philippines to purchase weapons from the US come from US military assistance ($340 million since 2001) and they can only be used to purchase US arms, not arms from Russia or China.

Contrary to Duterte’s assumption, Pres. Obama’s refusal to authorize the Philippine purchase of US arms was not to get back at him for his “son of a whore” insult, but to comply with the Leahy Law, named after principal sponsor Sen. Patrick Leahy of Vermont, which prohibits the US Department of State and Department of Defense from providing military assistance to foreign military units that violate human rights with impunity. 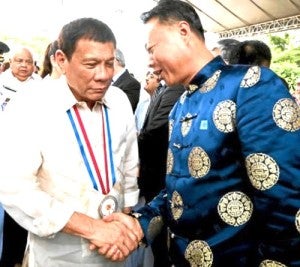 In the same week that Duterte had cussed Obama, Sen. Leahy denounced Duterte on the floor of the US Senate for “advocating and endorsing what amounts to mass murder.” Sen. Ben Cardin of Maryland echoed Leahy’s sentiment: “Senator Leahy is absolutely right when he said that a lack of respect for rule of law and democratic governance breeds instability, distrust, and sometimes violence.”

Obama has no choice but to comply with the “rule of law,” the Leahy Law, a problem that doesn’t exist for the despots in Russia or China.

There is a way to get around the Leahy Law, as US Major General Paul Eaton explained: “The value of the Leahy Law is that it serves as a moral guide to the application of U.S. military engagement. Some in the US armed forces have argued that the law frustrates US partnership at precisely the moment we need most to influence better behaviors. This dilemma has a solution embedded in the amendment itself, which provides that if human rights remediation has begun, US assistance can be brought to bear.” 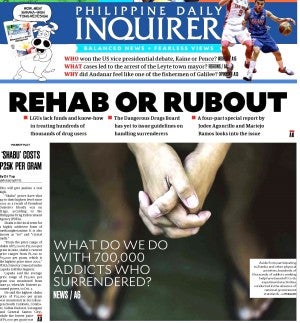 Unfortunately, human rights “remediation” is not likely to happen any time soon under Duterte. In fact, it may only get exponentially worse.

‘Happy to slaughter them’

On Sept. 30, after arriving back in Manila from a brief official visit to Vietnam, Duterte complained that he had been “portrayed or pictured to be a cousin of Hitler.”

Rather than objecting to it, Duterte reveled in the comparison. “Hitler massacred 3 million Jews … there’s 3 million drug addicts,” he said. “There are. I’d be happy to slaughter them.”

Duterte’s newly appointed Philippine Ambassador to the United Nations, Teddyboy Locsin, Jr, posted a tweet in support of his boss: “I believe that the Drug Menace is so big it needs a FINAL SOLUTION like the Nazis adopted. That I believe. NO REHAB.”

The pushback was immediate. German Foreign Ministry spokesman Martin Schaefer denounced Duterte’s comments as “unacceptable” stating: “It is impossible to make any comparison to the unique atrocities of the Shoah and Holocaust.” 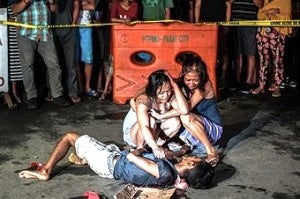 Grieving over fatality in war on drugs. INQUIRER FILE

World Jewish Congress President Ronald Lauder said Duterte’s remarks were “revolting” and added: “Drug abuse is a serious issue. But what President Duterte said is not only profoundly inhumane, but it demonstrates an appalling disrespect for human life that is truly heartbreaking for the democratically elected leader of a great country.”

Rep. Teodoro Baguilat asked Duterte if his policy means that “it’s open season now for all addicts, no more rehabilitation, just kill them systematically like what the Nazis did with the Jews.”

Duterte even sought to export his kill-the-addicts policy to Indonesia.

After he attended the ASEAN conference in Laos, Duterte visited Indonesia where the country’s anti-drugs chief, Budi Waseso, held a press conference declaring that Indonesia would launch a Duterte-style drug purge. Later, however, a spokesman for the national narcotics agency clarified that Indonesian “punishments have to be in accordance with our law and with national and international standards.”

Indonesia is evaluating its treatment of drug addicts. In an article in The Jakarta Post on March 20, 2014 (“Should drug addicts be jailed or rehabilitated?”), Kartono Mohamad, the chairman of the Indonesian Public Health Scholars Association, wrote that “the idea of treating drug users as criminals came from the fact they use or are in possession of drugs, which by law are declared illegal…On the other hand, drug addiction is also considered a form of social disease, like prostitution. Not so long ago HIV was also regarded a social disease. That is why Law No. 35/2009 on narcotics and addictive drugs provides treatment and rehabilitation for drug addicts, but not for drug traffickers or dealers.”

“In that case, we are inclined to differentiate between those who intentionally hook other people to become addicts and those who are the victim of the former group. Here starts the idea of treating drug addicts as victims. As victims they deserve empathy, treatment and assistance to get rid of their addiction through rehabilitation.”

The same reevaluation of the treatment of drug addicts is taking place in the United Arab Emirates where Sheikh Saif bin Zayed, the Minister of Interior and Deputy Prime Minister, had ordered all concerned authorities to evaluate current anti-drugs laws and suggest reforms.

Brig Gen Maktoum al Sharifi, the head of the Abu Dhabi Capital Police, welcomed the idea of reforms, saying the law should not consider a drug offender a criminal, as it currently does. 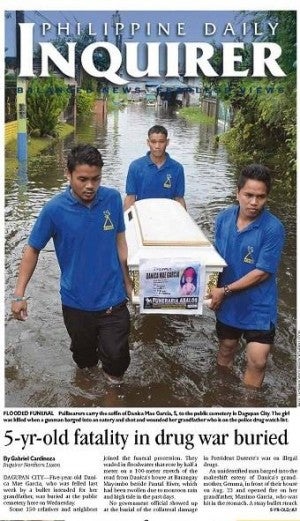 “A drug addict is a sick person and he should be treated as such,” Brig. Gen. al Sharifi said. “Alternative punishment would be more effective. A drug offender could be just an addict, not a criminal, but after locking him up for years he could come out involved in crimes such as stealing, drug dealing, et cetera.” The Abu Dhabi Police has proposed alternative punishments, which include community service, such as cleaning the streets, schools or voluntary work.

‘I will kill three million’

To cap a strange week, Duterte visited a Jewish Synagogue in Manila on Sunday Oct.2 to apologize to the Jewish people for his remarks. In a speech that was televised nationally, he explained that his comments were a reaction to negative criticism. “So I said, ‘Sure, I am Hitler, but the ones I will kill are these drug addicts … but it is not really that I said something wrong. But rather, they do not really want to tinker with the memory so I apologize profoundly and deeply to the Jewish people.”

“I would like to make it clear, here and now, that there was never an intention on my part to derogate the memory of six million Jews murdered. The reference to me was, I was supposedly Hitler, who killed many people … But I was very emphatic. I will kill three million,” he said.

He said: “The Americans, I don’t like them … they are reprimanding me in public. So I say: ‘Screw you, f–k you, everything else. You are stupid.”

And that’s how President Duterte ended an incredible week.