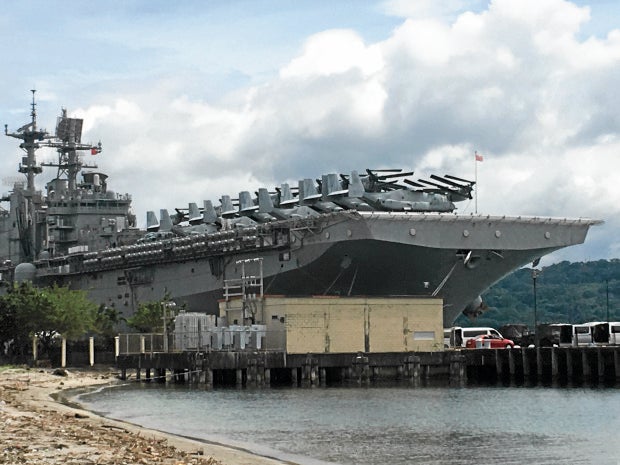 BAYOMBONG, Nueva Vizcaya—US Marines made their presence felt in northern Cagayan on Wednesday, repairing schools and training disaster responders while preparing for what could be the last joint military exercises between the Philippines and United States of President Duterte’s six-year term.

Mr. Duterte said last week that this month’s joint marine landing exercises would be the last with the United States and that he would seek closer ties with China and Russia.

Filipino and American Marines have been arriving in batches at the Camilo Osias naval station in Santa Ana town in Cagayan province this week for the Philippine Amphibious Landing Exercise (Phiblex 33).

The naval station located in San Vicente village will be used as the staging base for the exercises that will last up to Oct. 12.

“(The troops) are already here and I heard there will be more arriving. But at the moment, they are repairing our schools,” said Santa Ana Mayor Darwin Tobias.

The local government has not been informed about what military activities it would host, but residents welcome whatever benefits they can get from the war games, Tobias said.

An advance contingent of US Marines went to Santa Ana to help fix schools in Barangay Palawig and San Vicente as well as conduct classes on first aid and dental hygiene.

The troops’ arrival would boost the revenue of local hotels and inns, Tobias said.

“But with the latest pronouncements of the President, everything now becomes tentative. We are not sure how long these exercises will last, or if there will still be more to come,” he said.

In a statement, the US Embassy in Manila said American troops of the 3rd Marine Expeditionary Brigade had been working alongside Filipino Marines in a series of community activities since Sept. 23.

Filipino and American troops will also take part in joint training in “amphibious capabilities demonstration” aimed at improving their capability to respond to disasters, the statement said.

“Bilateral exercises such as Phiblex 33 ensure the US and Philippine Armed Forces train together to respond effectively during a real-world humanitarian disaster,” it said.

Cagayan Gov. Manuel Mamba said he supported the conduct of the military exercises in Cagayan, but would yield to Mr. Duterte’s decision to adopt an independent foreign policy.

“Let us leave foreign relations to the President. He should know better than us,” he said.

The airport, located outside the freeport, has not begun commercial operations.

“(Military officials) have sought permission to use the airport to allow bigger planes such as the C-130, Chinook helicopters and other types of aircraft,” Gonzales said.

Two US warships—the USS Bonhomme Richard and the USS Germantown—arrived at the freeport on Wednesday carrying an undetermined number of troops.

Subic Bay serves as a drop-off point for US troops participating in the war games.

The Philippines will also send its new strategic sea-lift vessel, the BRP Tarlac, for the drills.

Diño cautioned the visiting US troops against breaching security protocols.

“They are well aware that their activities are restricted inside the freeport. We’ll beef up the security to ensure that,” he told a press briefing on Monday. —WITH A REPORT FROM ALLAN MACATUNO, @amacatunoINQ